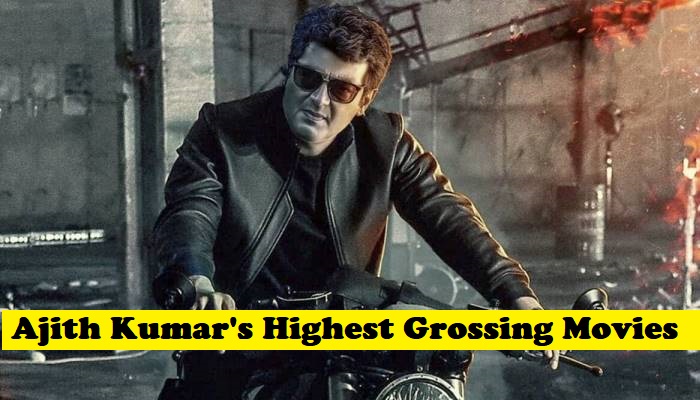 Tamil Superstar Ajith Kumar aka Thala Ajith as his fans call him will feature next in the action thriller Thunivu. The movie is set to release on Jan 11, 2023, and will clash with Vijay’s Varisu. It is going to be a big box office clash as the two biggest Tamil stars lock horns at the box office. Ajith Kumar is one of the biggest crowd-pullers in Tamil states. As Thunivu gears ups to set the box office on fire, here’s a look at Ajith Kumar’s highest grossing movies.

Directed by H Vinodh, who is also helming Thunivu, Valimai the movie stars Ajith as  Arjun, an IPS officer who sets out on a mission on hunting down illegal bikers involved in theft and murder.

Despite mixed reviews, the movie was a box office hit with a worldwide collection of Rs 224 Crore.

Ajith Kumar stars as a village chief who settles disputes. Things get messy when he takes on a big shot when trying to sort out the rough patch in his marriage after several years.

An action-thriller starring Ajith Kumar as a counter-terrorist agent is one of the best stylish action movies of his career. Released in 2017, Vivegam was a box office failure despite grossing Rs 150 Crore worldwide because the budget (Rs 130 Crore) was huge.

You can stream Vivegam on Disney+ Hotstar.

This action-drama is one of the best movies of Ajith’s career. Ajith stars as a doting brother who works as a cab driver and tries to hunt down three notorious criminals in Kolkata who had harmed his sister. The movie was a box-office blockbuster.

Starring Ajith Kumar, Nayanthara, Taapsee Pannu and Arya, this action-thriller was one of the highest-grossing Tamil movies of 2013.

Ajith Kumar stars as a mysterious man who along with a young computer hacker tries to unveil a major government conspiracy that resulted in several bloody deaths. Directed by Vishnuvardhan, this stylish action-thriller is full of twists and turns,

Nervonda Paarvai is an official Tamil remake of the 2016 Hindi movie Pink starring Amitabh Bachchan and Taapsee Pannu. Despite being a dark social drama, the movie emerged as a box office hit with a worldwide gross collection of Rs 116 Crore.

All eyes are now on Thunivu. It will definitely become one of the highest grossing movies for Ajith Kumar.