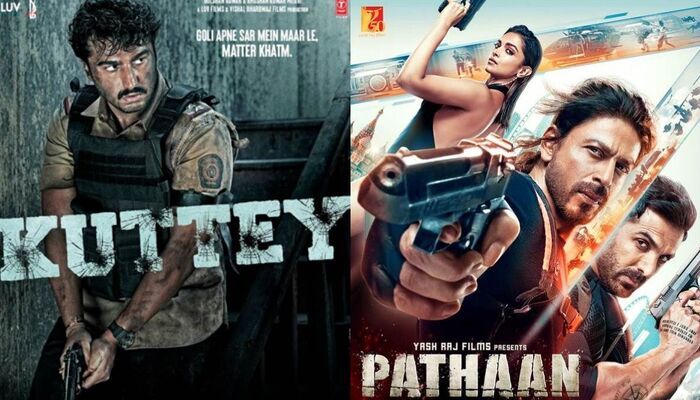 From Shah Rukh Khan’s much-awaited Pathaan to Arjun Kapoor’s Kuttey, Bollywood movies releasing in January 2023 in theatres and on OTT.

2022 wasn’t a great year for Bollywood s far as box office numbers are concerned. If we look at the box office verdict of major releases, only five movies managed to emerge as hits at the box office. The industry is looking for a revival with several mass movies set to release this year. Bollywood is looking for a good start this year with Shah Rukh Khan’s Pathaan and Arjun Kapoor’s Kuttey. Besides these January 2023 will see three more major releases coming from Bollywood. Here’s a look at Bollywood movies releasing in January 2023. The list contains both theatrical and OTT releases.

Where to watch: Netflix

Mission Majnu is a spy thriller movie starring Sidharth Malhotra and Rashmika Mandanna in lead roles. The movie is presented as the untold story of India’s greatest covert operation, taking place before and during the Indo-Pakistani War of 1971.

Where to watch: Zee5

Chhatriwali is a social comedy starring Rakul Preet Singh, Sumeet Vyas, Satish Kaushik, Dolly Ahluwalia and Rajesh Tailang. Set in Karnal, the movie is about a chemistry genius female who is looking for a job. At the same time, she uses her skills to fight an important societal taboo of educating the youth about Sex Education. The movie aims to promote the importance of male contraceptives and safe sex.

Where to watch: In Theatres

One of the most anticipated Bollywood movies of 2023, Pathaan will mark Shah Rukh Khan’s return to the big screen after more than four years. Also starring John Abraham and Deepika Padukone, Pathaan is a spy action thriller mounted on a huge scale. It also stars Salman Khan in an extended cameo who reprises his role as Tiger.

Where to watch: In Theatres

Directed by Rajkumar Santoshi, the movie revolves around the fictional world where Mahatma Gandhi survives the attack and later meets Nathuram Godse in prison, the conversation leads to a fiery debate between them.

The movie stars Deepak Antani and Chinmay Mandlekar, along with Arif Zakariya, Pawan Chopra, Tanisha Santoshi and Anuj Saini in key roles. Deepak will be seen playing the role of Mahatma Gandhi, and Chinmay will essay the character of Nathuram Godse.

Which of these movies are you excited about? Let us know in the comments section.