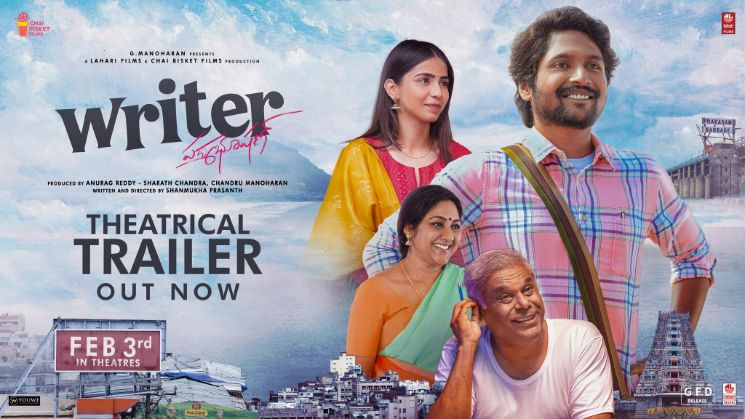 Writer Padmabhushan Trailer is out: Don’t miss this fun!

Suhas, who made his debut as a lead actor in the acclaimed films Colour Photo, is all set to entertain the audience with his upcoming rom-com titled Writer Padmabhushan. Written and directed by Shanmuka Prashanth, the film will be released on February 3.

The trailer of the film was unveiled today by actor,  Adivi Sesh at AMB Cinemas, Hyderabad. Suhas will be seen opposite the talented Tina Shilparaj in the film, along with the stellar star cast of Ashish Vidyarthi, Rohini Molleti, Goparaju Ramana, and Sri Gouri Priya in pivotal roles.

Introducing #WriterPadmabhushan & his lovely family to you all ❤️

Writer Padmabhushan is a quirky romantic comedy that revolves around the story of Suhas and Tina. Suhas plays the role of Padmabhushan, an aspiring writer who is determined to make it big in the literary world. On the other hand, Tina Shilparaj plays the role of an independent and outspoken woman who helps him to become a successful writer.

The film is a perfect blend of humor and romance and is sure to capture the hearts of the audience. With a talented cast and a great story, Writer Padmabhushan is all set to entertain the audience.

So get ready to witness Suhas and Tina’s unique chemistry Writer Padma Bhushan Full Movie on the big screen on February 3. It promises to be an entertaining ride that you don’t want to miss!