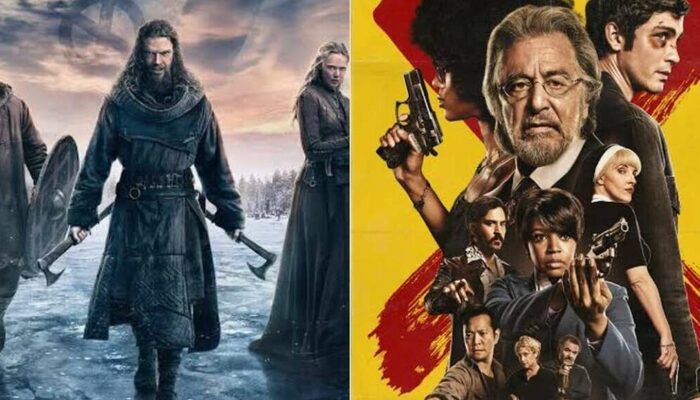 The second season of Netflix’s sex comedy will see young entrepreneurs Natalia, Monika and Paulina trying to balance their personal and professional lives. Watch these entrepreneurs face new challenges on their entrepreneurship journey.

The spin-off of the original Vikings series chronicles the beginning of the end of the Viking Age, marked by the Battle of Stamford Bridge in 1066. The new season will focus on the brave trio of Leif – the Viking explorer, his sister Freydís and the prince of Norway – Harald Sigurdsson.

Amazon Prime Video is back with another exciting season of Hunters that follows Meyer Offerman, a Holocaust survivor, who finds and leads an oddball team (“hunters”) to hunt down and eliminate Nazis hiding in America in the 1970s.

Dog Gone is a family drama movie that revolves around a young man whose beloved dog goes missing. He embarks on an incredible search with his parents to find him and give him life-saving medication.

The third and last season of Sky Rojo brings back Wendy, Ciral and Gina. The trio is now settled down and living a peaceful life. But with Romeo still lingering around, waiting to seek his revenge, will the trio manage to survive.

Lamborghini: The Man Behind the Legend

The much-awaited drama Lamborghini is set in the post-war era when Italy went through a string of complex changes. The movie focuses on the rise of Lamborghini, and his infamous rivalry with Enzo Ferrari.

The much-awaited fourth and final season of Apple TV+’s Servant is back. Watch the horror and complex tale as the Turner family continues to crush to discover the real identity of Leanne Grayson.

Directed by Randeep Jha and Prashant Nair, Trial by Fire, is Netflix original series based on the best-selling book Trial by Fire: The Tragic Tale of the Uphaar Fire Tragedy by Neelam and Shekar Krishnamoorthy.

The series chronicles the struggle two grief-stricken parents go through after the deadly Uphaar cinema fire. The series will describe how the incident happened and shows the struggles victims must go to seek justice for the loss of their loved ones.

Which of these movies/shows are you excited about? Let us know in the comments section.