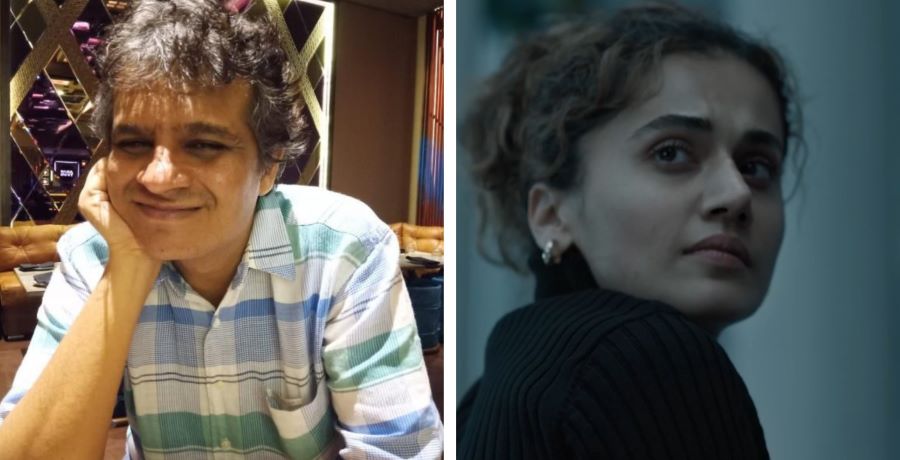 More than two decades ago, Pawan Sony started his journey as a journalist and documentary filmmaker. His goal was to write and direct films but there was limited scope for it in Delhi, the city where he was based in. An interaction with a filmmaker in the year 2002 led him towards writing his first feature-length film.

Pawan has been a part of the entertainment industry in Mumbai for the last several years and has, to his credit, television shows like ‘P.O.W. – Bandi Yuddh Ke’ and films like ‘Dil Dosti Etc’, ‘Sixteen’, ‘Issaq’ and ‘Stree’. ‘Blurr’, his most recent film featuring Taapsee Pannu and Gulshan Devaiah in the lead roles, premiered on the streaming platform Zee5 in December. The film is a remake of the Spanish film ‘Los ojos de Julia’/‘Julia’s Eyes’ and has been jointly produced by Zee Studios and Outsiders Films, Pannu’s newly formed production company.

In this interview, Pawan talks about his journey as a screenwriter in the entertainment industry, the process of adapting a foreign film, how journalism contributed to his growth, upcoming projects and more.

‘Blurr’ has registered good viewership and has received largely positive reviews. How do you look at this response?

The response has been phenomenal. Considering that, with few exceptions, hardcore thriller or mystery has never been one of the key Hindi film genres, the response becomes even more special. I see exciting times ahead for this genre. The success of ‘Blurr’ proves that the audience is hungry for good thrillers.

What is the biggest challenge in writing an “adapted screenplay”?

The challenge is to set it in the Indian context. You also have to think about what you can bring to it. You can just replicate a film in a new language or add something valuable to it. We have tried to do the latter.

Is adapting a film easier than writing an original screenplay? Some also say that it is harder as you do not have a clean slate to work on.

It actually depends on the project. It would not be fair to say that an adapted screenplay is easier to write than an original screenplay or vice-versa.

Apart from being the director of ‘Blurr’, Ajay Bahl has also co-written the film with you. How was the experience of working with him?

Ajay is a wonderful person to work with. He brings a lot of depth to his work.

You have also collaborated with him on ‘The Lady Killer’, a film which features Arjun Kapoor and Bhumi Pednekar in principal roles and is slated to release next year.

It’s been a good experience working with Ajay on that film as well. It’s shaping up very well. I am keenly looking forward to see how the audience reacts to it.

You started your career with journalism. In an interview, you stated that cinema was something you always wanted to do.

Yes, that’s right. I studied journalism at Bhartiya Vidya Bhavan in Delhi. It was a diploma course. I graduated in philosophy from Zakir Husain Delhi College at Delhi University. I did my masters in psychology. I was living in Delhi which has always been the hub of journalism but the film industry, as we know, is based in Mumbai. Though I wanted to get into films, I decided to work as a journalist for some time. Journalism gave me a lot of exposure to life. It helped me develop a better understanding of human beings and the world we live in. Those 2-3 years of working as a journalist proved to be very valuable for me.

Did you want to write films? Or, was there some other department you were interested in?

I wanted to write and direct. But since writing was my first love, I gradually drifted towards it and direction plans took a back seat.

Do you plan to direct a film someday?

Right now, there are no such plans. However, if I connect to a story on a personal level, I might want to direct it.

You were based in Delhi and had no connections in the film industry. How did you get the opportunity to write your first film ‘Dil Dosti Etc’?

Manish Tiwary (director, Dil Dosti Etc) and I first interacted in the year 2002. At that time, there was no social media but you had this thing called a mailing list. I was a part of a mailing list called Web Cinema. It was similar to Yahoo! Groups. On that mailing list, Manish had shared a post stating that he was looking for a writer for a feature film. I responded to it and that’s how we got in touch. At that time, Manish was based in Rome and was working for the United Nations. We met for the first time when he came to India. I wrote the film while I was still in Delhi. It took us a while to find a producer. The film finally released in 2007.

‘Dil Dosti Etc’ did moderately well at the box-office and became a cult film over the years. A large number of people discovered it on DVD and now, it is on a streaming platform as well. The film was based in Delhi. Was it a personal story?

You can call it a personal story as it was set in a milieu I was familiar with. It had characters I had seen around me. It was not an auto-biographical film though.

When did you decide to move to Mumbai?

It was a decision that was pending for a while. I knew I had to move to Mumbai to write and direct films. I moved to the city in 2004.

‘Sixteen’ was a very charming film. What kind of research you had to do to write a film on 16-year-olds when you were not in that age bracket anymore?

I had a cousin who was around sixteen at that time. Hanging out with him helped. You do interact with people of different age groups every day, so that gives you an idea about what’s happening around. Raj Purohit, the director of the film, had made a TV show on teenagers called ‘School Days’ which used to be aired on Doordarshan in the late ‘90s. He had directed teenagers, so he had a good understanding of them. We did the kind of research we needed to do. I wish people in India made more teenage films. Worldwide, there is a huge market for such films but not enough films have been made in this genre in our country. And with rare exceptions, most don’t have much depth.

You wrote the additional story for ‘Stree’. It has been your biggest box-office success till date.

Yes! It was a sleeper hit. Working with Raj & DK on that film was a wonderful experience. Both commercially and critically, I think the film exceeded all our expectations.

What is that one advice you would give to an aspiring screenwriter?

It is important to be persistent. There will be times when you might have to struggle to get the right projects but you should be patient and wait for good opportunities to come your way.

Did you have any formal training in screenwriting?

Not really. I did some short-term courses and workshops but nothing apart from that.

Do you have a favourite genre?

No, there is no favourite genre as such. I like watching and writing all kinds of films. As a writer, I want to dabble in different genres. War and sports, however, are two genres that don’t interest me much.