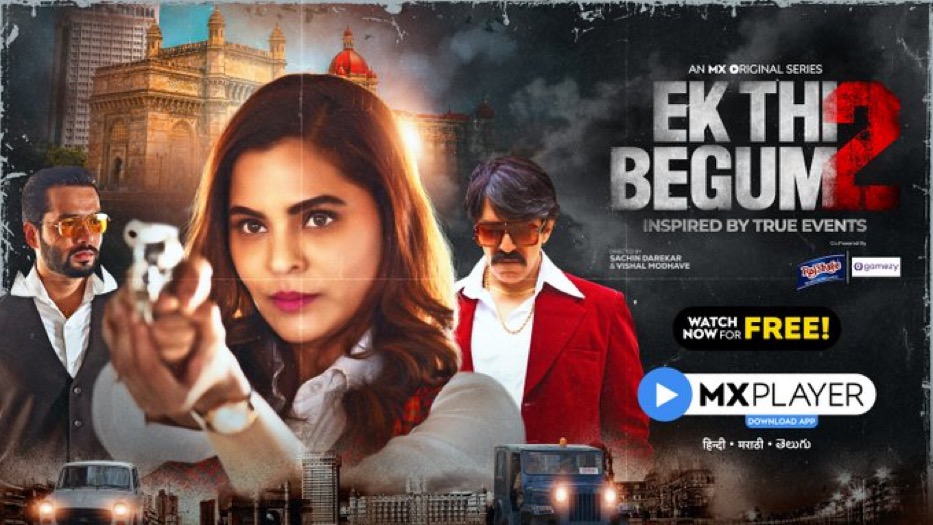 On its release, the first season of Ek Thi Begum had turned out to be a pleasant surprise. With dialogues in Marathi and Hindi, it was a unique gangster entertainer that had a female protagonist [Anuja Sathe] going all out to avenge the death of her husband. Based on true events from the early 80s, it didn’t require rocket science to ascertain which reel life character was emulating which real life personality. It was apparent that director duo of Sachin Darekar and Vishal Vimal Modhave had done their homework and it showed right till the climax.

However, the first season had ended on a cliffhanger with Anuja’s character been stabbed brutally at her home and left for the dead. A sequel was on the cards and so buoyed was MX Player by the success of the first season that the second had an even bigger budget allocated, hence resulting in a far better stage, setting and scale. This time around, the stakes were higher for the characters in there as well, and that shows in the manner the second season kick-starts with a bang.

One complaint that many had from the first season was that it took a couple of episodes before the show eventually kicked off. That isn’t the case in the second season though as it takes no time in coming to the point. While it is revealed that Anuja’s character is back from the dead with her cop husband [Chinmay Mandlekar] nursing her well, new characters are introduced, the key one being an upcoming gangster [Hitesh Bhojraj] who doesn’t mind taking on two established rival gangsters [Rajendra Shisatkar, Vijay Nikam] but even ‘Dubai kingpin’ [Ajay Gehi].

Moreover, the best part about Ek thi Begum S2 is that this time around it isn’t just about Begum but also many other characters around her. Of course, she is the one who is calling the shots by infiltrating gangs and manipulating the members there all for her benefits. However, others are not pushovers either and this is where another strong female protagonist, Sauraseni Maitra, comes into the picture. As the wife of the gangster [Hitesh Bhojraj] who also eventually finds a way to rise up the ladder after being used as a doormat for long, she is a surprise discovery.

Meanwhile, it is also impressive to see how the director duo of Sachin Darekar and Vishal Vimal Modhave goes about exploring different layers of this gangster drama. One has seen a lot of movies belonging to this genre from the likes of Ram Gopal Varma, Sanjay Gupta and Anurag Kashyap, and while each one of them has his own grammar of storytelling, it is interesting to see how Sachin and Vishal go about incorporating the learning gathered from these men and bringing on a filmy narrative to this web series that is lengthy, detailed and engrossing.

Just like the first season, violence is the underlining theme of the second season as well. However, thankfully sexually explicit scenes have been relatively curbed and so is the usage of expletives. Still, had that been totally eliminated as well in Ek Thi Begum then that wouldn’t have much of a difference to the web series since as it is there is a good storyline being told, and hence could well have done away with these distracting factors. After all, there is lot of drama in there with twists and turns at various corners, and that’s what keeps you on the edge.

Most of the key actors do well too. One can see that Anuja Sathe has further seen her confidence go up, both as an actress as well as the character, and she is particularly impressive when she starts calling the shots. Sauraseni Maitra is a find and while she is indeed beautiful, her dialogue delivery is confident and reminds one of Deepika Padukone. Ajay Gehi has a ‘Gabar’ like presence in the web series as he has very limited scenes but whenever he appears, he makes a super solid impact. Ditto for Vijay Nikam who could fill in the Irrfan Khan space.

Chinmay Mandlekar had a very large part to play in the first season, though he is restricted in the second season. He is a bit dull though and also looks old for the part. Hitesh Bhojraj, also seen in Class of ’83 last year, fits in well into the stereotypical gangster space. Rajendra Shisatkar has a relatively lesser part to play this time around as a retired gangster but impresses whenever he appears on screen. Mir Sarwar and Shahab Ali are decent in their supporting parts.

For those who have binged on the likes of Satya, Company, Shootout series and Mumbai Saga, Ek Thi Begum 2 makes for an entertaining watch.