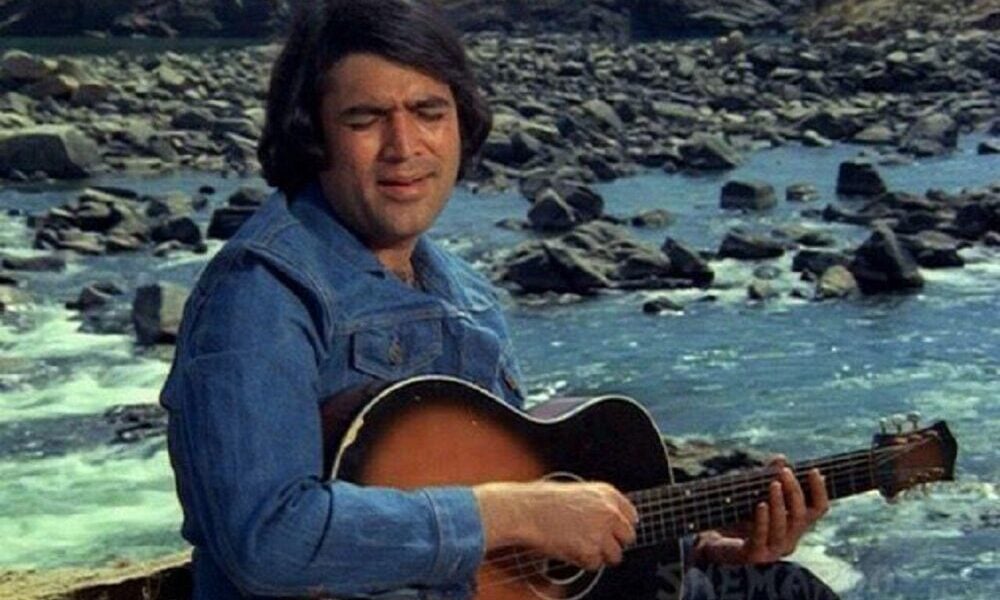 The on-screen charismatic icon Rajesh Khanna will always ‘live’ and ‘thrive’ in the hearts and minds of lakhs of his followers and fans especially because of his cheerful tracks (as in ‘Chalaa Jaata Hoon’) or soulful melodies (“Zindagi Ka Safar, Hai Yeh Kaisa Safar’) or rhythmic songs (‘Jai Jai Shiv Shankar’).

Undoubtedly, it was a team-work magic combination of the composer-lyricist-the singer and of course, Rajesh Khanna’s perfect lip-sync accentuated by his charismatic slant-nod-eyes-blink-hand-palm-twist mannerisms in most of his famous songs.  Even during the instrumental interludes, the Khanna would ‘convincingly pretend to play’ that particular musical instrument with remarkable ease.  Chartbuster songs remained one of the biggest repeat-value allure-attractions of all Rajesh Khanna films throughout his heyday and peak of his superstardom. One of the discreet reasons for this was that Khanna-Saab used to personally attend and sit-thru music sittings-sessions and song recordings of songs which were to be picturized on him. The music-savvy ‘Kakaji’ shared amazing rapport vibes with iconic music directors including Kalyanji Anandji, S D Burman, and Laxmikant Pyarelal. While both veteran composers Pyarelal and Anandji-bhai (both of whom I know very well personally) still recall how Khanna-Saab would often give valuable nuances-inputs-suggestions for both solos and duets songs in his films, they also mentioned that his physical presence would be a vital motivator for the musicians and playback singers.  It was a known fact in the showbiz industry that Rajesh Khanna shared a close bonding with ‘late’ genius composer-singer R D Burman (Pancham-da). Since I knew both Panchamda and Kakaji (Khanna) personally during their lifetime they had mentioned to me how they we like “soul-mates” to each other. During a private party for one of his 1990 movies at Rajesh Khanna’s terrace apartment, Pancham-da told me how his “buddy- superstar” would listen to catchy tunes and request him to reserve them for him.  The ‘Aradhana’ super-star told me that he hummed a catchy waltzy tune when they both were together airborne on a flight to attend the outstation premiere of Baharon Ke Sapne (1967). That’s when Khanna requested him to reserve it for him. Four years later, at the songs-sitting of the movie Kati Patang (1971) Khanna reminded RDB to recall and use that same waltz-meter tune that he had hummed on the flight. That tune was used for the evergreen song ‘Yeh Jo Mohabbat Hai’! In my authored memoirs book ‘R D BurMania’ the temperamental yet music-savvy Rajesh Khanna (who used to attend RDB’s song recordings) exclusively revealed to me, how he was highly fascinated with RDB’s grunt-bass-rasp effect voice in this cabaret duet song ‘Meri Jaan Maine Kahaa’ from his movie ‘The Train’ (1970). “Pancham-da promised me that very soon in the future he would compose a song where he would use that same crackling bass-rasp-grunt voice. “Two years later, RD kept his promise and conjured up that playback number for my disguised screen character which goes ‘Duniya Mein Logon Ko ’ in ‘Apna Desh’(1972). But when the song was being recorded, I became skeptical as to how cine-goers would react, because they would find it quite bizarre. But genius Pancham was so confident that the unconventional song picturized on me would jolt my fans and acquire cult status. To balance the unusual rasp-grunt voice, he sang the mukhda in his normal voice, with the breathing sounds as ‘fillers’. That then was RDB’s gutsy conviction,” disclosed Khanna when he exclusively spoke to me for my authored ‘RDBurMania’ memoirs book.