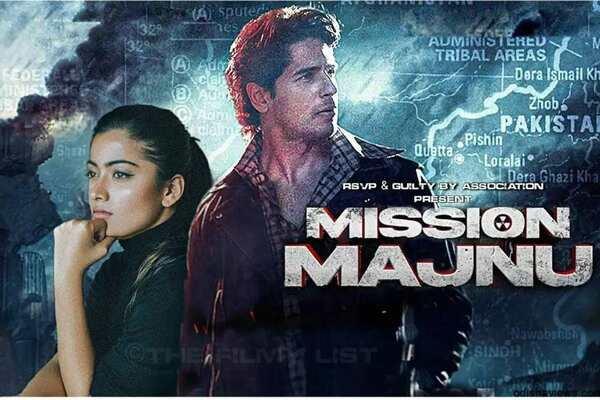 After knocking it out of the park with Shershaah, Sidharth Malhotra is back with another patriotic actioner but it seems like a watered-down Raazi.

Mission Majnu is inspired by true events – the sacrifice of a RAW agent who was sent on a covert mission in Pakistan to stop a nuclear threat.

The story is set in the 70s – after India successfully carries out its nuclear testing, Pakistan is determined to make its own atomic bomb. They set up a nuclear facility in secret – and young Amandeep Singh (Sidharth) is tasked with identifying its location and providing physical evidence of the nuclear testing.

He carries this mission off by the alias of Tariq, a tailor by the day, and a spy by night. Though he is married to a blind young girl called Nasreen (Rashmika) to maintain his cover, his feelings for her are real.

Amandeep/Tariq carries the taint of being the son of a traitor – a fact that his handler in India (Zakir Hussain) constantly mocks him for. It spurs him even more to prove his loyalty to his country.

In Pakistan, Tariq is helped along his journey by two accomplices – Kumud Mishra and Sharib Hashmi. Watch Mission Majnu to find out how he manages to infiltrate the secret location and change history!

What Do We Think:

Mission Majnu is really quite Mission ConvenientlyPossible instead. Sidharth Malhotra as the handsome young agent is able to ferret out state secrets with remarkable ease, flashing a winning smile. It seems rather ludicrous at times, making the stakes less compelling.

Mission Majnu dives right into it – skipping past the love story, not letting it form a strong enough emotional core. Amandeep’s past trauma, trying to scour off the ‘gaddar baap ka gaadar beta’ tag, while hard-hitting on paper, is superficial on the screen. Sidharth Malhotra is good in the action scenes but seems awkward and bland otherwise as a spy.

Rashmika’s accent isn’t as distracting as it was in Goodbye, but playing a blind girl, there’s limited scope for her character. Apart from being his pretty little shy wife, there’s nothing much to do for her. Kumud Mishra is solid in his performance, Sharib Hashmi too is decent but a little suspiciously OTT at points.

Mission Majnu is a slow burn for most parts but has a few exciting action sequences like the one on the train and the shootout in the climax. It has a very ‘been there, done that‘ vibe to it, and one would concede that Raazi did it better, and seemed more genuine.

If you’re in the mood for some patriotic action, you can catch Mission Majnu streaming on Netflix now.