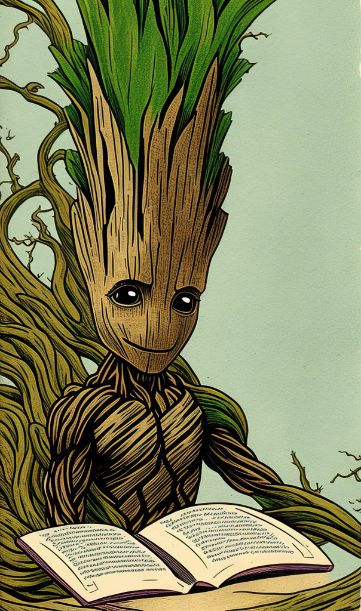 In a new Marvel Comics series, Groot from GoG finally gets an origin story.

In a new Marvel Comics series, Groot from GoG finally gets an origin story.

The upcoming five-part series, “I Am Groot,” is written by Christopher Hastings with art by Flaviano, and promises to answer some of the questions surrounding Groot’s mysterious past.

According to Marvel, the series will explore Groot’s life before he joined the Guardians of the Galaxy, as he embarks on a journey of self-discovery — one that will take him across the cosmos and pit him against some of the most powerful creatures in the universe.

But the series will also feature Groot’s friends and family, as he reunites with the family he left behind on his homeworld of Planet X. As Marvel puts it, “With each step of his journey, Groot will grow — both in size and enlightenment — and will come to understand the power that lies within him.”

The first issue of the five-part series will debut in April and will be followed by a hardcover collection of all five issues in July. The series promises to provide fans with a deeper understanding of Groot’s character and backstory and should be an exciting read for any Marvel fan.

So if you’ve ever been curious about Groot’s past, then the upcoming series promises to be a must-read. Keep an eye out for “I Am Groot” when it hits store shelves this April!

It’s time to get excited, Marvel fans! Jackson Lanzing, Collin Kelly, and Kev Walker have teamed up to reboot the Guardians of the Galaxy series with the epic “Grootfall” story arc, and they’re releasing a brand new “Groot” title to coincide with it. This exciting new comic series will act as a primer for the upcoming event series, and will also help tide fans over until director James Gunn’s highly anticipated “Guardians of the Galaxy Vol. 3” hits theaters in May.

For those unfamiliar with the Guardians of the Galaxy series, it follows a group of extraterrestrial misfits who travel the galaxy in an effort to protect the universe from harm. The team is led by none other than Groot, a sentient, tree-like creature with a heart of gold. Through their adventures, the Guardians of the Galaxy become close friends and a powerful force for good.

The new “Groot” title will explore Groot’s early life, from his birth in the forest of ancient Xandar to his fateful first meeting with the Guardians of the Galaxy. Fans will get to experience Groot’s adventures and growth as he learns the importance of friendship, loyalty, and courage. Groot’s story promises to be full of exciting battles, heartwarming moments, and plenty of humor.

At its core, the “Groot” title is a celebration of Groot’s character, but it will also serve as an entertaining primer for the upcoming “Grootfall” story arc. The “Grootfall” arc promises to be an epic story of Groot’s struggle to protect his friends and home from a powerful enemy. It’s sure to be packed with thrilling battles, memorable moments, and plenty of heart.