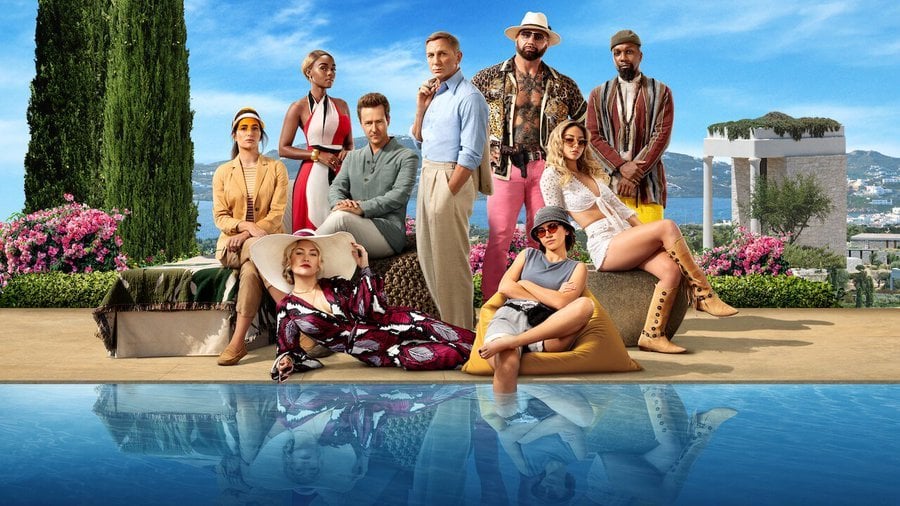 Glass Onion is the second film in the popular detective movie franchise Knives Out. The first, released in 2019, was a well appreciated detective thriller starring Daniel Craig and directed by Rian Johnson. The hit actor-director pair is back with another riveting whodunnit!

While Bollywood is struggling to create movies that today’s discerning audiences will like, Hollywood has dished out yet another enjoyable movie before the year ends. Glass Onion: A Knives Out Mystery released on Netflix on December 23, 2022, a month after its limited theatrical release abroad. This is the second film in the popular detective franchise Knives Out.

The first Knives Out (2019) was a well appreciated detective movie starring Daniel Craig and directed by Rian Johnson. The hit actor-director pair is back with another riveting whodunnit!

Detective Benoit Blanc (Daniel Craig) spends most of his time in the bathtub, bored and kind of delirious as he is because of a lack of stimulating cases to crack. But not for too long, as a new mystery comes along.

Miles Bron (Edward Norton), a so-called genius tech billionaire of a company called Alpha sends a unique puzzle of an invitation to his team of “disruptors” for an annual party. This time, it is on a Greek island on his luxurious property that comes with a unique glass house called the Glass Onion. The task to engage them? Bron’s own “murder” mystery that the disruptor friends will have to solve.

But is there a hidden agenda behind such an invite? Is Bron really going to be killed? How will Detective Blanc land there and will he solve the case before the friends? Are these people really “friends” or are they after each other’s lives or businesses? Even as the viewer is contemplating, the plot takes a twist, as it happens in most thrillers. No point in revealing anything more. Watch the film for it!

Keeps you entertained and gripped to the proceedings throughout. There are not too many twists and turns, thankfully. Just enough to make a good mystery film.

The build-up of the characters is interesting, with an excellent ensemble cast. As part of the main plot, we have Kate Hudson as Birdie Jay, a former supermodel who now sells warm track pants as a fashion designer; Janelle Monáe as Andi Brand, Bron’s former business partner; Kathryn Hahn as Claire Debella, Governor of Connecticut; Leslie Odom Jr. as Lionel Toussaint, head scientist at Alpha; Dave Bautista as Duke Cody, a YouTuber and men’s rights activist; Madelyn Cline as Duke’s girlfriend Whiskey, and Jessica Henwick as Birdie’s assistant Peg.

There is no prize, though, for the disruptors if they solve the mystery – except an Apple i-Pad that Blanc happens to ask for. This seems like a brand placement in the film, just like the cameo by tennis superstar Serena Williams, and other celebs who are used for name-dropping by Bron.

Daniel Craig reprises the character of detective Benoit Blanc with ease. He is so good that fans can easily forget he ever played the iconic spy character of James Bond in so many movies. Benoit Blanc has his own fans now, just like Sherlock Holmes or Hercule Poirot.

The other cast members mentioned above are, as we said, excellent. No one misses a beat and they have helped create an engaging detective film.

The screenplay and direction by the acclaimed Rian Johnson establishes him as one of the best creative people of the genre. Audiences will have great expectations from him hereon for whodunnits rather than the Star Wars films.

Film buffs were waiting for a good whodunnit, and Glass Onion fulfills that need! Those who were a tad bit disappointed with the lavish Death on the Nile – 2022 version by Kenneth Branagh – will be satisfied with Knives Out 2.

There is something about a good detective thriller, whether a book or a film – it is riveting, entertaining, and like a satisfying meal at a fine dine. Glass Onion: A Knives Out Mystery scores on all those points. Although it may not be the best of such films, it is certainly one of the best!