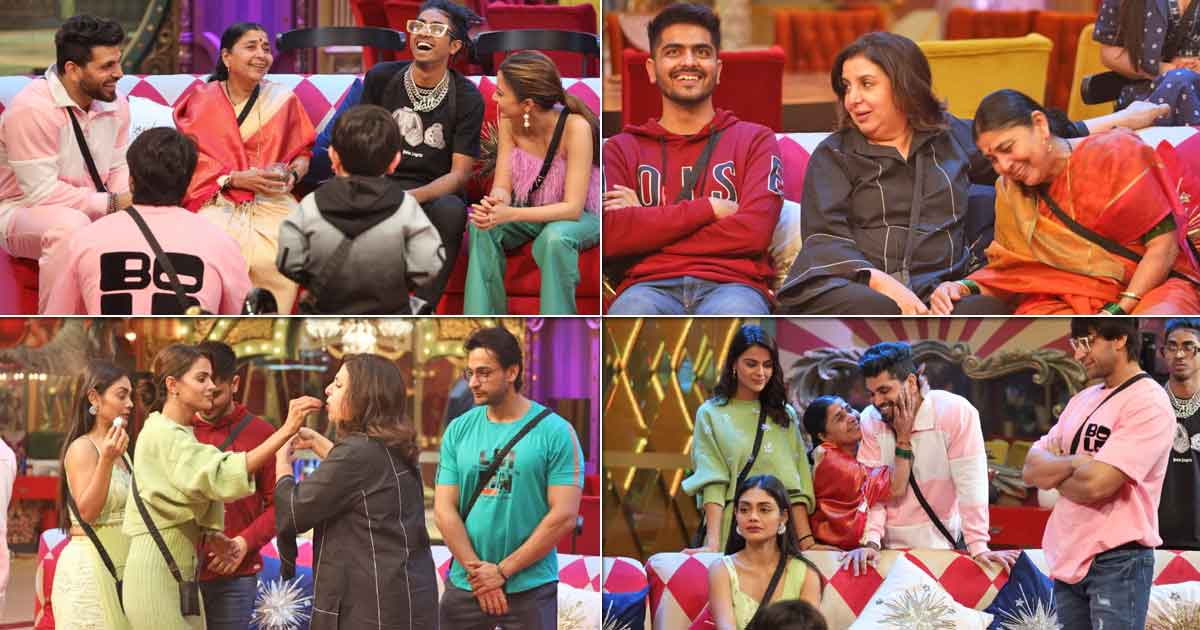 It has been three months since the housemates of COLORS’ ‘Bigg Boss 16’ have been away from their families. Imagine their relief and surprise when they see their family members walking into the house. ‘Bigg Boss’ announces that at regular intervals he will command housemates to ‘freeze’ and after which they must stay unmoved until he orders ‘release’. The first family member to set foot into the house after the freeze announcement is known for her super entertaining movies and slapstick sense of humour.

Sajid Khan’s sister Farah Khan, who is a huge fan of the show, brings her sunshine energy to the house.

A teary-eyed Farah Khan hugs her frozen brother Sajid Khan and happily informs Sajid that he’s playing the game superbly. She applauds the mandali and remarks that Sajid is lucky to have so many members by his side. She declares that she has three more brothers in Shiv Thakare, Abdu Rozik, and MC Stan, who have stood by Sajid. The filmmaker cheers for MC Stan’s army of fans and lets Sumbul know that Sajid only annoys her because he considers her his sister. The biggest dope she gives the housemates is that Tina Datta’s mother has become a star and she has fought with Shalin Bhanot’s mother.

After she congratulates all the contestants on giving the viewers one of the best seasons of the show, they bring in her birthday with a cake-cutting ceremony. It will be interesting to see what brand of entertainment the Khan siblings lend to this episode.

While the house reels from Farah’s entry in the house, its vibe becomes home-like with Shiv’s mother, Asha Thakare walking into the ‘Bigg Boss’ house with the second freeze announcement. Despite being frozen, the emotions of all the housemates come bursting out as she hugs her son, who tears up as she compliments his game and bolsters his courage to win the season. She goes on to hug Abdu Rozik, Sajid Khan, and Nimrit Kaur Ahluwalia and gushes on about everyone’s admirable qualities. With the third freeze announcement, the house is abuzz with anticipation.

Everyone is happy to see Priyanka Chahar Choudhary’s brother Yogesh Choudhary step inside the house. He warmly greets everyone and shares bite-sized insights on how everyone is looking on the show. Priyanka introduces him to her friend Sreejita De, her ex-friend Archana Gautam and her rival Nimrit Kaur Ahluwalia.

As if the master of the house inviting the family members of the contestants isn’t surprising enough, he shocks them to the core by announcing their involvement in the nomination drill and summoning them to the confession room. Aghast and dismayed, the housemates don’t know what to expect next. However, they can’t resist commending the big twist the master introduces.

Must Read: Bigg Boss 16: Tina Datta’s Team Pens An Open Letter After Her Character Assassination On TV Asking, “She’s Expired Maal” So Now We Want To Turn A Young Lady…”