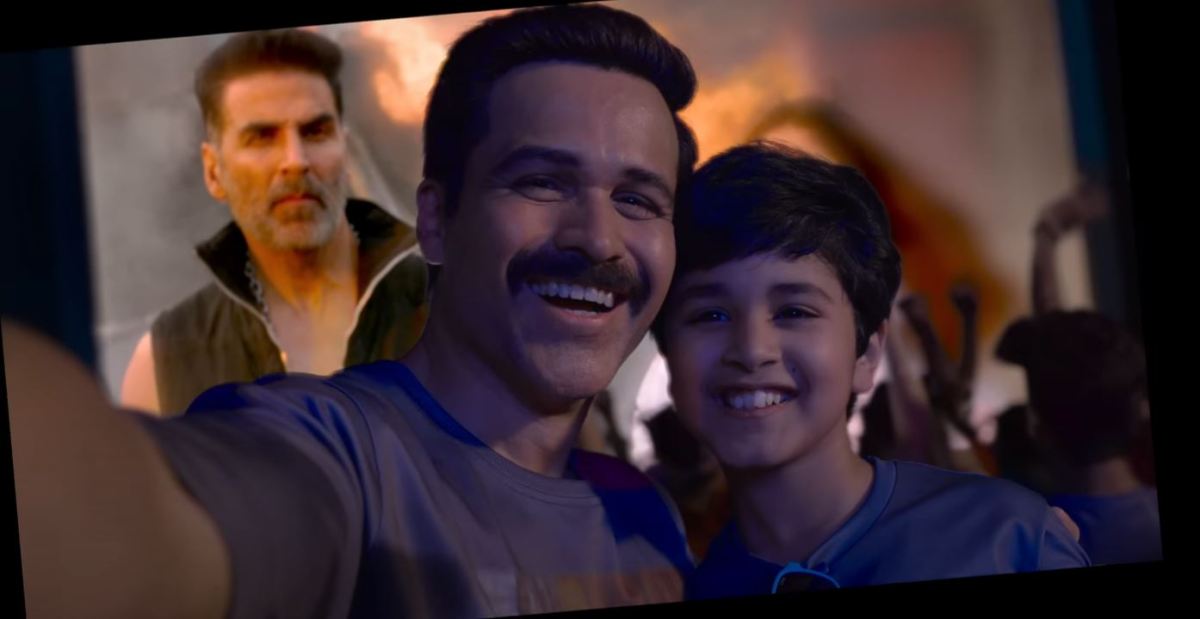 Though a digital phenomenon [selfie] but the plot looks quite dated.

Dharma Productions collaborating with popular South actor-producer Prithviraj Sukumaran is news. However, the question is what are they bringing for the fans? With a title like Selfie [2023], it probably is out to honour the fans without whom movie stars across the globe are nothing.

Director Raj Mehta’s Selfie [2023] though sees an ardent fan squaring up against his idol. Om Prakash Agarwal [Emraan Hashmi] is a diehard Vijay [Akshay Kumar] fan. Agarwal is a simple Transport Sub Inspector in Mumbai who desperately seeks a selfie featuring his son and super star Vijay. The super star discloses how he loves driving. Something happens, presumably related to Kumar’s driving which perhaps sees his license either being confiscated, or maybe the super star was driving all these years without one. We suspect the former to be a stronger possibility. The reveal will come later, but Vijay insulting Agarwal in front of the latter’s son breaks their hearts. The sub inspector then vows to bring his hero down to his knees, setting the stage for a fan versus super star conflict. Didn’t we see something similar in Shah Rukh Khan’s Fan [2016]? Unfortunately, that experiment didn’t yield desired results.

The Selfie trailer appears to celebrate fanaticism more associated with cinema down south. Ego is something seldom seen from Kumar on or off the screen. This character, though, has his mood swings. What’s not missing is the Akshay Kumar sense of humour. The seasoned star has had it tough in the last few years. Audiences haven’t shied from criticizing Kumar for doing films by the dozens. The actor takes it on his chin, but hits back via a film where Vijay proudly states that he will do four theatrical films a year, plus two on OTT platform.

Remaking the Main Khiladi Tu Anari [1994] title song is nostalgic but once again reflects the paucity of fresh lyrics. Emraan Hashmi has been struggling for ages. He admitted to being a huge fan of Akshay Kumar the actor, more so the person who motivated him during his real son’s illness. The early fanfare that we see from Agarwal is not very enticing.

We hope Diana Penty and Nushrratt Bharuccha have more meaningful roles than seen in the trailer.

Honestly, while the term Selfie is a modern digital phenomenon, but the trailer and the story look dated. We hope that film might turn out to be an upgrade.

Selfie [2023] is set to be released in theatres on 24 February. Watch the trailer below.