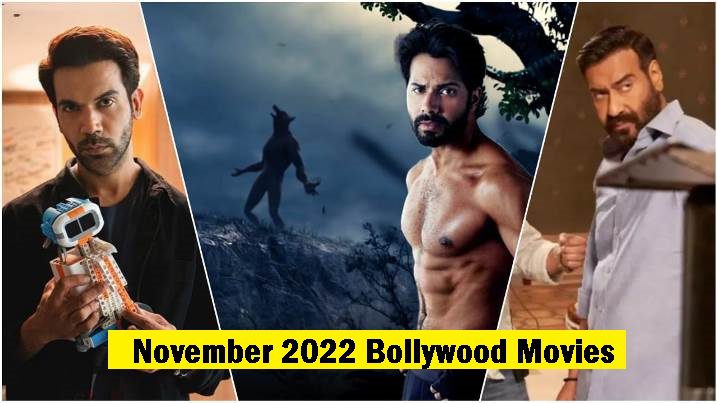 Drishyam 2 to Bhediya, here’s a complete list of all the Bollywood movies with their release dates that are coming out in November 2022.

Here’s a list of upcoming Bollywood movies for November 2022. It is another big month for movie lovers as a lot of amazing movies will be released. This list includes both theatrical as well as digital releases. Let’s see which movies are headed to theatres, and which ones will release on OTT platforms like Netflix, Hotstar, Amazon Prime Videos, and so on. The list includes movies like Double XL, Phone Bhoot, Bhediya, etc.

Double XL is directed by Satram Singh and produced by Krishan Kumar. It will release on  November 4, 2022. The movie stars Sonakshi Sinha, Huma Qureshi, Zaheer Iqubal, and Mahat Raghavendra.

Phone Bhoot is a horror comedy that will be released on November 4, 2022. The movie features Katrina Kaif, Ishaan Khatter, and Siddhant Chaturvedi.

Mili is another Bollywood movie releasing on November 4, 2022. It is a ‘survival thriller’ directed by Mathukutty Xavier and produced by Boney Kapoor.  A remake of the director’s own 2019 Malayalam film Helen, it follows a woman stuck in a freezer fighting to stay alive.

Uunchai is directed by Sooraj Barjatya and produced by Rajshri Productions. It features Amitabh Bachchan, Anupam Kher, Boman Irani and Danny Denzongpa as four friends along with Parineeti Chopra, Neena Gupta, Sarika and Nafisa Ali. This family drama revolves around the friendship of senior citizens. When one of the four friends dies due to a sudden heart attack, the other three fulfil his impending plan to track Mount Everest.

Where to watch: Netflix

“A young man desperately tries to make it big with some unlikely allies and a dastardly diabolical plan to pull off the perfect murder.”

Thai Massage is a heartwarming story of Atmaram Dubey (Gajraj Rao), struggling with erectile dysfunction and his adventures to overcome it, including a trip to Thailand. Directed by Mangesh Hadawale, it stars Gajraj Rao, Divyendu Sharma and Rajpal Yadav in lead roles.

The cutest couple of B-town Riteish Deshmukh and Genelia D’Souza are reuniting on-screen for a romantic comedy-drama Mister Mummy.

Directed by Abhishek Pathak, this crime-thriller stars Ajay Devgn, Tabu, Shriya Saran, Akshaye Khanna, Ishita Dutta, Mrunal Jadhav and Rajat Kapoor.  It is a remake of the 2021 Malayalam film of the same name and also the sequel to Drishyam (2015).

Bhediya is a comedy horror movie directed by Amar Kaushik and produced by Dinesh Vijan. It stars Varun Dhawan and Kriti Sanon in lead roles. It is the third movie in Vijan’s horror-comedy universe after Stree and Roohi.

Besides these movies, several Bollywood movies will make their debut on OTT. These are:

So, as you see, some interesting Bollywood movies are coming up in November 2022. Which of these movies are you excited about?