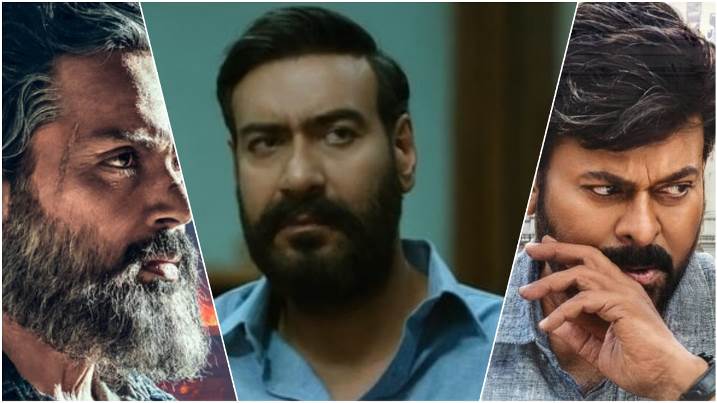 It is going to be a thrilling weekend for cine lovers. Several much-anticipated movies are making their way to OTT platforms including the Hindi version of the blockbuster Sita Ramam, and Godfather. Besides these OTT releases, the most-awaited sequel of Drishyam (2015) is arriving in cinemas on Nov 18, 2022. So, an exciting weekend awaits cine-goers. Here’s a look at new movies coming this weekend on OTT platforms and in theatres.

The Hindi version of  Mrunal Thakur and Dulquer Salman’s blockbuster romantic drama movie Sita Ramam will debut on Disney+ Hotstar. The stories follow an orphaned soldier’s life changes after he receives a letter from a girl named Sita. He meets her and love blooms between them.

The much-hyped Megastar Chiranjeevi’s Political thriller Godfather will make its OTT debut on Netflix. Directed by Mohan K Raja, this movie is a remake of the Malayalam blockbuster Lucifer. Godfather follows the political power play after the untimely death of the chief minister of the state.

Karthi’s spy thriller Sardar is coming to OTT on Nov 18, 2022. Written and directed by P. S. Mithran, the movie revolves around a spy who is alienated from his family due to a secret military mission and suddenly meets his son who is a police officer. Karthi has a double role in the movie.

The story follows a group of pregnant ladies, who meet at a prenatal class and prospect on far more than they expect. They reflect upon their inner selves, looking for answers to their deep-rooted problems. Do they find the answers they’re looking for?

The fantasy drama follows a young girl who discovers a secret map to the dreamworld of Slumberland. With the help of an anomalous outlaw, she traverses dreams and flees nightmares, with the hope that she will be able to see her late father again.

In theatres from Nov 18

The much-awaited sequel to the 2015’s thriller drama Drishyam will hit the theatres on Nov 18, 2022. The sequel will follow the story after seven years as the same case reopens with new witnesses and confessions. Will Vijay be able to protect his family this time?

In theatres from Nov 18

Riteish Deshmukh and Genelia Deshmukh are back together on a big screen after 12 years. Mister Mummy is based on the life of a couple who find themselves in a strange and almost impossible biological dilemma. Amol and Gugloo (Riteish and Genelia) are a married couple. They get the shock of their life when Amol ends up getting pregnant somehow. What follows next is what the movie is about?

Which is your pick for this weekend? Let us know in the comments section.