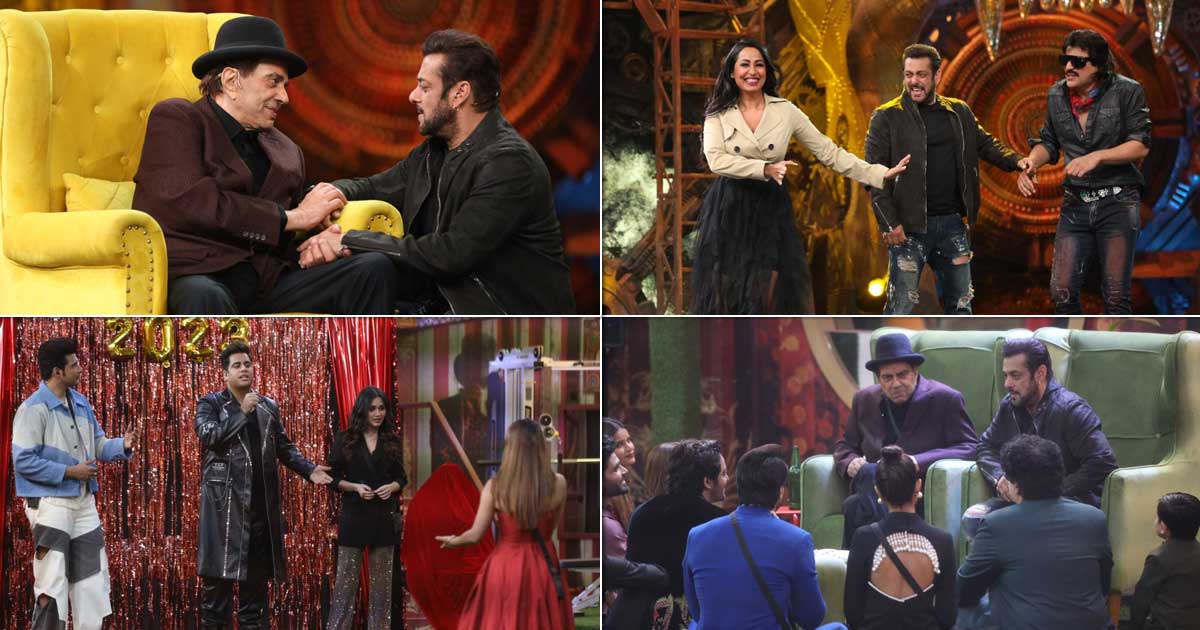 To embrace the New Year’s Eve in COLORS’ ‘Bigg Boss 16’, tonight, the viewers will witness the presence of the one and only, Dharmendra and many magnificent stars joining in making it an evening to remember. Our beloved host Salman Khan and Dharmendra engaging in a warm exchange, the new year episode will break a new ground. The three-hour episode will witness Salman Khan welcoming Dharmendra for the second time and wishing that he scores a hat-trick next year.

Krushna Abhishek, another guest for the big evening, will be seen playing the cameo of the legend Jeetendra ji as he recounts the old times with Dharmendra in his hilarious act.

After a pleasant welcome, host Salman Khan and Dharmendra enter the ‘Bigg Boss 16’ house which astonishes the housemates. Dharmendra regales the housemates with shayris. Later in a task, all the housemates will be asked to impress Dharmendra using various props and the one who succeeds in meeting the expectations will win ‘Ghar Ki Dreamgirl’ & ‘Ghar Ka Dharam’ tag and a coveted prize.

Keeping the fun quotient intact with Salman Khan and Dharmendra in the house, housemates perform another task named, ‘Kon hai apna task’. In this task, the housemates must offer laddoos to their favoured person whom they consider ‘apna’. Post that, housemates participate in a ‘New Year Clearance Task’ where they declare which contestant’s time has come and they must stick a sticker on them which says, ‘sold’ stating their reasons!

Later, to amp up the energy in this new year’s evening, Kashmira and Krushna make an amazing entry on the stage with Salman Khan. They will be seen talking about their show ‘Big Buzz’ which is exclusively available to watch on the VOOT.

To make the evening more blissful, popular actor Karan Kundrra will also grace the housemates in ‘Bigg Boss 16’ house. He will be seen reading out the New Year Resolutions of housemates which they had written then and questions them if they can successfully pull off their resolutions. Do you think housemates can keep their resolutions for the coming year?

Amid the fun and drama happening over the weekend, the major concern of eviction remains floating over the heads of the 7 nominated contestants! Who do you think will say goodbye to the house of ‘Bigg Boss 16’ this time?

Must Read: Disha Parmar Breaks Silence On Quitting Bade Achhe Lagte Hain 2: “When I Had To Play A Mom To A 5-Year-Old, I Had My Apprehensions”