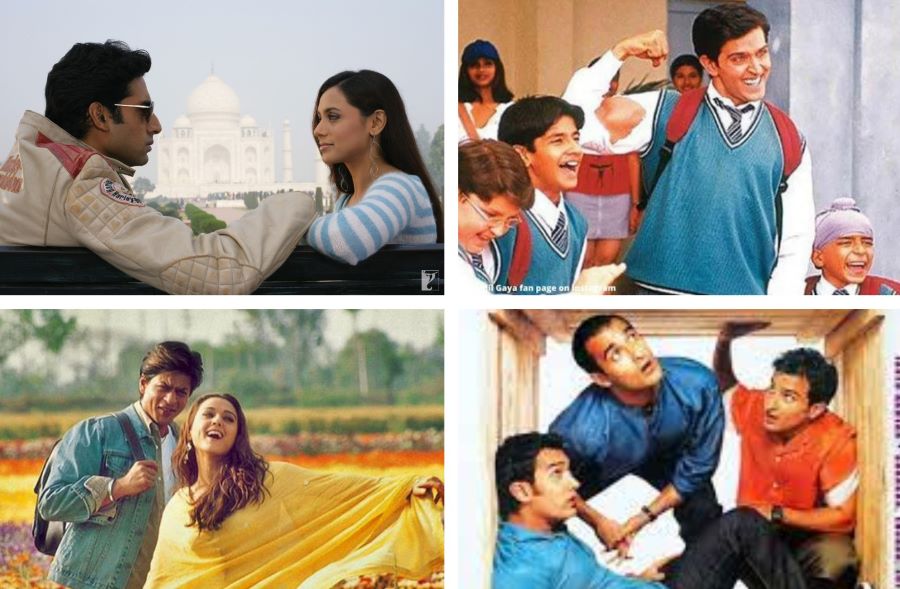 In India, Bollywood is considered a force of nature. There are movie fans, and then there are Bollywood fanatics – people who live their lives drowning in the dramatic, exciting, action-packed world of Indian cinema. Every era in Bollywood has distinct characteristics that set it apart from others.

While today, films are getting increasingly hard-hitting and “real”, the movies of the 2000s era did not always foray into hyper-realism. In the 2000s, the drama quotient in films was generally high (no matter the genre), costumes still felt like costumes, and the music was a delightful mix of soft pop-rock, techno, and foot-tapping remixes. Oh, it was the era of superstars, which is now a concept of the past (and that’s not necessarily a bad thing!).

If you’re in a nostalgic mood for the 2000s, let us take you down memory lane to revisit these 5 cult Bollywood flicks that defined the decade cinematically.

Abhishek Bachchan, Rani Mukherji, and Amitabh Bachchan starrer ‘Bunty Aur Babli’ is a crime comedy classic. It follows a couple of con artists as they commit bigger and better crimes, prompting a cop into a nationwide manhunt. While the movie is a fantastic specimen of the early 2000s cinematography, what stands out is the chartbuster with evergreen popularity, ‘Kajra Re’.

Rakesh Roshan’s iconic remake of Spielberg’s ‘E.T.’, ‘Koi… Mil Gaya’ is a film that will make you laugh and make you cry. Hrithik Roshan is excellent as the atypical Rohit, who falls is love with Priety Zinta’s vivacious Nisha and befriends a solar-powered alien. The emotional bond between man and extra-terrestrial that this movie portrays will sweep you away, in a very cheezy manner.

Yes, we know Yash Raj Films’ ‘Dhoom’ (starring Abhishek Bachchan, John Abraham, and Uday Chopra) is not a great movie, cinematically speaking. But there’s no denying that this fun film is an iconic cult classic. 18 years later, you still sometimes hear the “Dhoom Machaale horn” on the roads. The movie follows a cop on a mission to catch and stop a gang of motorbike robbers who are about to pull a casino heist. This movie is so glam that you will want to ride bikes and play casino games for real.

Hailed as one of the greatest romantic movies of Indian cinema, ‘Veer-Zaara’ is the epic product of Kings of Romance Shahrukh Khan and Yash Chopra’s collaboration (dream team!). It tells the emotional story of star-crossed lovers who overcome religion and political strife to find each other after decades of being apart. Yash Chopra’s long-awaited return to romance is definitely worth multiple watches.

Long before ‘Zindagi Na Milegi Dobara’ set friendship goals, there was ‘Dil Chahta Hai’ already doing that for the 90s’ kids. Following the romances of 3 long-time friends, and their falling out and eventual making up, Farhan Akhtar’s ‘Dil Chahta Hai’ explores the concept of boundaries and support in close friendship. This film will make you want to pack your bags for an impromptu trip to Goa with your BFFs.