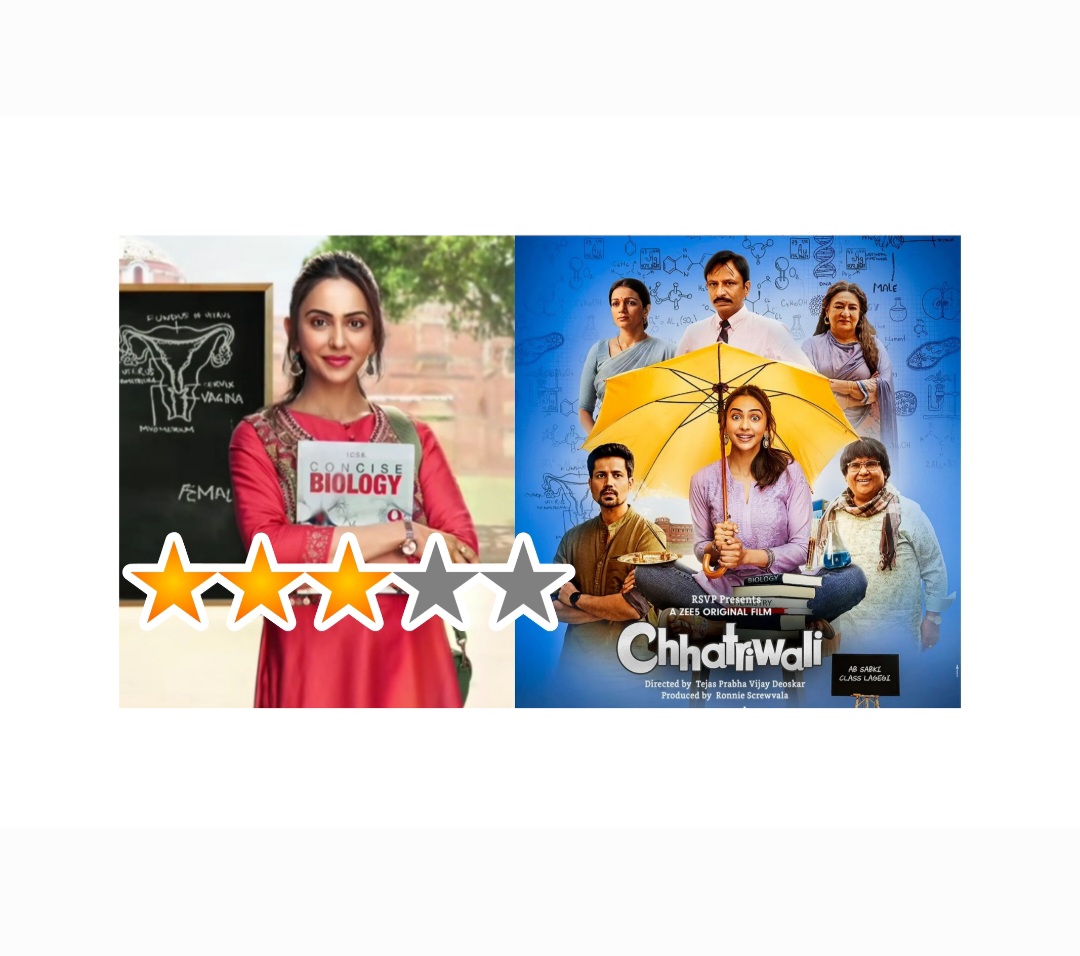 Rakul Preet Singh-starrer Chhatriwali – streaming on Zee5 – is a decent entertainer which tries to quash old-age taboos around safe sex.

Sanya Dhingra (played by Rakul Preet Singh) is an unemployed chemistry genius in Karnal who lives with her teen-patti obsessed mother (played by Dolly Ahluwalia) and her younger sister. Sanya takes chemistry home tuition and is desperately looking out for a job.

One day, she bumped into Ratan Lamba (played by Satish Kaushik), the owner of ‘Can Do Condoms’ who is in urgent need of a condom quality tester. He gets impressed by Sanya’s knowledge of chemicals and offers her a job as a quality control head of his condom company. Initially shy and enraged, Sanya ends up taking the job in order to make ends meet.

During this time, Sanya falls in love with Rishi Kalra (played by Sumeet Vyas) – the owner of Kalra Pooja Bhandar. Even after her marriage, she hides the fact that she works at a condom plant and lies that she works in an umbrella company to her mother, Rishi, and his family, consisting of her strict and conservative brother-in-law, Bhai Ji (played by Rajesh Tailang) and his wife Nisha (played by Prachee Shah).

Things take a dramatic turn when Rishi and his family found out about the truth of Sanya working in an ‘umbrella’ factory.

What Do We Think?

After Aparshakti Khurrana’s Helmet (2019) and Nushrratt Bharuccha-starrer Janhit Mein Jaari (2022), Rakul Preet’s Chhatriwali is the latest social drama that uses humour to send across a perspective message about taboo subjects like “condoms”, “safe sex” and the importance of “sex education” among kids.

The first half of Chhatriwali will remind you of the Nushrratt Bharuccha-starrer, however, the second half is completely different. Chhatriwali tends to raise an important question – what is it so shameful about practicing safe sex or to talk about the changes one’s body goes through?

Humour is one of the driving forces of this movie. However, you simply cannot resist cringy lines like “Humare pati homemade rasgulla khayenge woh bhi jaisa unhe pasand hai” in context of using protection during intercourse.

In terms of performance, Rakul Preet Singh does a decent job. While there is nothing extraordinary about Sanya’s character, Rakul gets into the skin of this educated and confident girl and adds sparks to her ordinary part. She shoulders the film with the help of Sumeet Vyas. He is likeable and endearing. Every time Sumeet appears on the screen, it lights up on its own. Satish Kaushik is funny. Rajesh Tailang plays his role as a conservative Bhai Ji – who despite being a biology teacher, asks his students to skip the reproductive chapter – convincingly. In an almost 2-hour-long movie, Dolly Ahluwalia as Sanya’s mother and Prachee Shah as her sister-in-law have a very little to do.

Besides the half-baked second half, another let down of this movie is its songs. The movie started off on a lighter note but lost pace in parts.

Overall, Chhatriwali is a decent weekend watch for the message it wants to propagate.