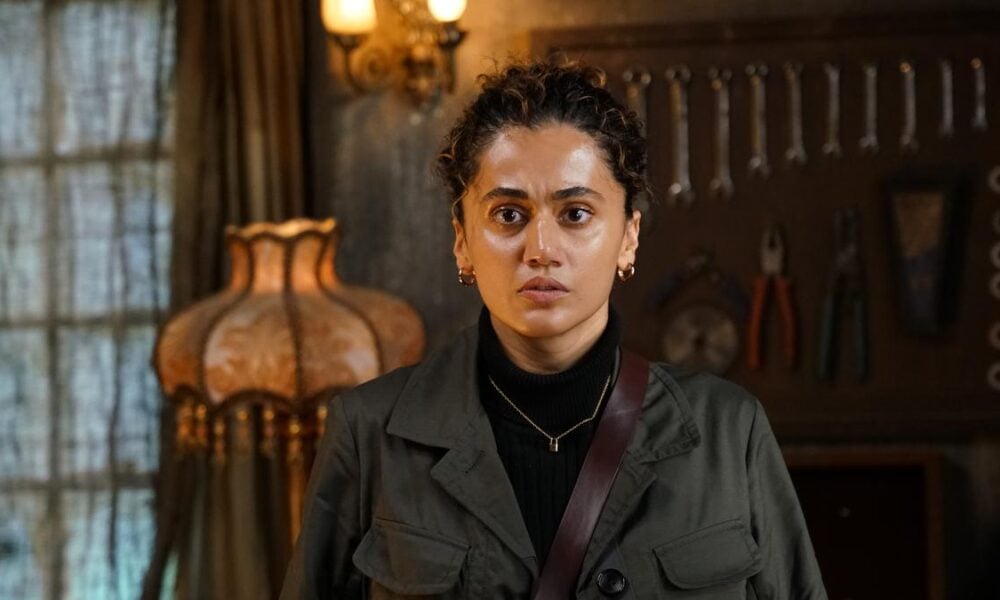 Blurr, is a remake of the Spanish horror-thriller Julia’s Eyes. This is actress Taapsee Pannu’s second Hindi remake of a Spanish thriller after Badla. Taapsee plays a double role of twin sisters Gayatri and Gautami. Both suffer from progressive vision loss. Gautami is found dead by suicide, hanged. The sister, Gayatri, believes that this is not a suicide but murder. The local cop wants to close the case as there’s no evidence in post-mortem or otherwise. Gayatri is an anthropologist and her marriage with her husband Neel (Gulshan Devaiah) is going through troubled times. He accompanies her to the small town in Uttarakhand where the twin sister died. The town is covered with dense forest and only a few residents live nearby Gautami’s house. Everyone is stranger than the other.

Gayatri is not convinced about the suicide and decides to investigate the matter herself. Gayatri is not only suffering from progressive vision loss, she also feels that she is being chased by someone. Scenes involving these moments are definitely the film’s money shots. I am not a fan of horror. I always need a supplement with it i.e. a horror-comedy or horror-thriller. The real-life horror is more frightening than the gimmicky ghosts – Tumbbad and Dibakar Banerjee’s segment in Ghost Stories scares the shit out of you but at the same time makes you marvel at the creation.

Also read: Salaam Venky Review: Salaam to the spirit, but…

The claustrophobic world created by exceptional production design and cinematography gets on your nerves because there’s no breather from the horror that the protagonist faces. To be frank, Blurr became depressing for me after a while. But it held my attention nevertheless. What is a horror/thriller flick without stunning background music (BGM)? Blurr gets these essentials and much more right.

The role is tailormade for Taapsee. This is her maiden film production too. And the actress doesn’t disappoint on both fronts. The lack of activism in this film/protagonist helps her performance, as opposed to the utterly toxic Haseen Dillruba, sloppy Shabaash Mithu, and terrible Rashmi Rocket. It was good to see her in her elements again after the overwhelming Manmarziyaan.

This is director Ajay Bahl’s third film after B.A. Pass and Section 375. The director let go off quite a few films which he was already on board to eventually make this one. Worth it, I say. He makes direction look ridiculously easy in films which are so difficult to pull off. Blurr is streaming on ZEE5. I watched the film at a screening in a preview theatre. Must admit, I would have stopped watching the film if I was watching it on my mobile/laptop, because I don’t enjoy horror. You can’t escape a preview screening. But it was good that I watched it in a dark theatre. The atmospherics totally make it an immersive experience overall. If you are a horror/thriller fan, then Blurr shall totally be your jam.