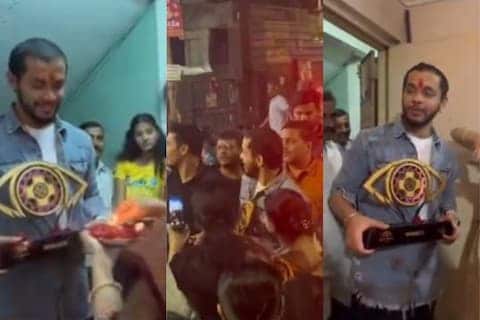 Akshay’s mother can be seen waving at her son with a plate of aarti.

Akshay Kelkar along with the trophy won a golden necklace, a sum of Rs 15,55,000 and a Rs 5 lakh cheque for being the ‘Best Captain’ of the Bigg Boss house.

The fourth season of Bigg Boss Marathi recently concluded and Akshay Kelkar emerged as the winner of this season. Actress Apurva Nemlekar became the first runner-up and Kiran Mane became the second runner-up of the TV reality show’s fourth instalment. As the season has just ended, the contestants are currently in the limelight. Recently, Kiran Mane was welcomed with a bang in his hometown Satara. Now Akshay Kelkar, who became the winner of Bigg Boss Marathi season 4, has been welcomed into his house with great enthusiasm. The actor shared a video of his homecoming on social media which is going viral online.

The video showcases moments of the first time Akshay reached his home with the trophy after becoming the Bigg Boss Marathi winner. Akshay and his family can be seen rejoicing in the video. Also, Akshay’s neighbours and fans can be seen gathering to wish and welcome him. The fans that gathered outside his house are extremely eager to take selfies and photos with him, as evident in the video. Akshay’s mother can be seen waving at her son with a plate of aarti. This video has garnered a lot of attention on social media.

Seeing the video his fans were very happy and wished him good luck with his future projects.

Akshay Kelkar has grabbed everyone’s attention by winning the fourth season of Bigg Boss Marathi. Akshay, who became the winner of this season, received the shiny Bigg Boss trophy along with a golden necklace, a sum of Rs 15,55,000 and a Rs 5 lakh cheque for being the Best Captain of this season.

Akshay Kelkar made his acting debut in the Hindi television series Nima Denzongpa in which he played an important role alongside Surabhi Das, Sonakshi Batra and Manish Raisinghan. The actor entered Bigg Boss Marathi season 4 three months ago and quickly established himself as one of the strong candidates in the house. He became known as the “angry young man” of the house due to his quips and fights, which made him famous.