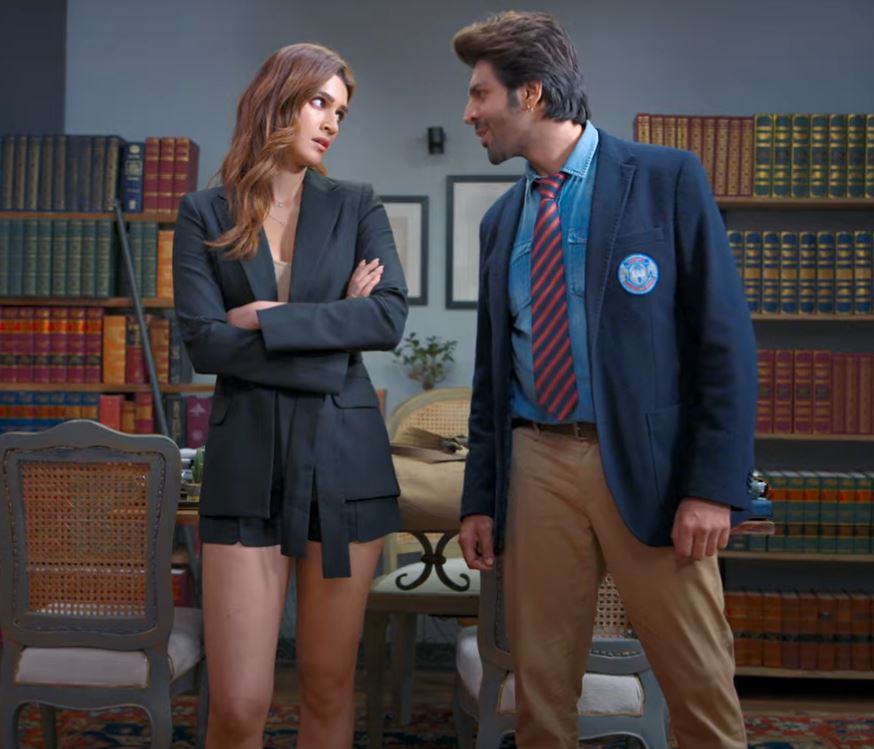 Beware of Kartik’s haath and Kriti’s laat – Beyond Bollywood

The Rohit Dhawan directed action comedy rekindles memories of masala entertainers of the 70s, 80s. Though aimed at masses, but the decent trailer could also attract the classes.

As his contemporaries struggle, it is Kartik Aaryan who has become the ‘Hero no.1’ for masala entertainers. After delivering the successful horror comedy Bhool Bhulaiyaa 2 [2022], Aaryan’s next theatrical release is the action-packed masala entertainer Shehzada [2023]. Helmed by Varun Dhawan’s brother Rohit, Shehzada is the official Hindi remake of Telugu super star Allu Arjun’s film Ala Vaikunthapurramuloo [2020]. We haven’t seen the Telugu film but it was a big hit down south.

There is a sense of deja vu to the plot, rekindling memories of similar masala films that drew the crowds in the 70s, 80s, early 90s. Kishen Kanhaiya [1990] springs to mind, Kartik Aaryan doesn’t have any double role, but like the macho Kanhaiya, Kartik Aaryan’s character is out to lay claim to his palatial family property. Be it mythology, films or life, mankind has waged wars, litigations over property, wealth.

Aaryan is stunned to find out that Valmiki [Paresh Rawal] is not his biological father but it is Randeep Jindal [Ronit Roy].  Valmiki works in Jindal’s bungalow for years. He is not only out to claim what is his right, but the Shehzada is also keen to win over perhaps his cousin’s fiancé [played by Kriti Sanon]. It is understandable that you are shocked to know that Valmiki is not your real father, but what compelled Aaryan to slap Valmiki? In a family film, this is slightly disrespectful.

A masala entertainer is meant for the masses, but some elements in the trailer could be cheered by the masses too.  Here’s a cocky guy openly flirting with a leggy lass, praising her beauty and not afraid to marvel at her long legs. The girl is quick to chide, “They can kick too”.  Besides, privileged director Rohit Dhawan is brave to mock nepotism. Since S.S. Rajamouli is the most respected filmmaker India, a humble joke on him would be welcome by the RRR [2022] filmmaker too.

Shehzada will have its masala, but maybe not the usual melodrama. The ‘action ke beech kahani mat pooch’ (Don’t ask a story between an action scene) line is a real killer.

90s actor Manisha Koirala perhaps plays the mother here. This might be a maiden masala film for her. We’re not quite impressed with the villain who assaults Ronit Roy.

The trailer stands out for Aaryan’s swag. wit, action moves.  Kriti Sanon, too, might get to wield those long legs. So, beware of Kartik’s haath and Kriti’s laat.

Shehzada [2023] is set to be released in theatres on 10 February. Watch the trailer below.