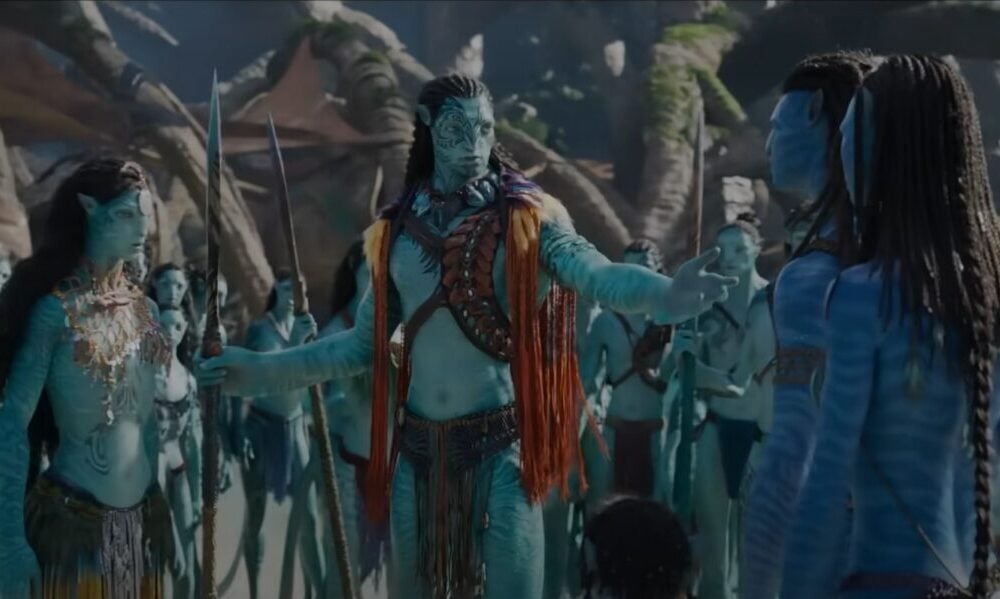 Avatar: The Way of Water

There are some films – whether in Hollywood, Bollywood or World Cinema – that definitely deserve a sequel or a franchise, whether it has been planned by the makers or not. James Cameron’s Avatar (2009) was one such film that enthralled fans the world over with groundbreaking visual effects (VFX) and the creation of a whole new universe, with its characters and story. Fans waited for 13 years for the sequel – Avatar 2: The Way of Water – that finally released on December 16, 2022 worldwide to huge applause and some mixed reviews as well. Let us take a look at what Avatar 2 is all about.

While Cameron worked on the original Avatar for four years before seeing it come to light, he says he worked on Avatar 2 just for a year. Well, we can assume that the final pre-production must have taken that much time. But the 13-year gap between the two films means he had enough time to decide on the script of the next few sequels that are in the offing.

The huge gap between the first two Avatar films meant that Cameron and his co-writers had to give a good leap and twist in the story. Ergo, if in Avatar 1 we saw an alternate world in the ‘Blue people’ or the Na’avi people of the Pandora island that lived in the forests and worshiped the Sacred Tree, in Avatar 2 we see the Blue people defending themselves against the wicked earthly people, as well as making new friends in another clan of the Na’avi – the Sea people who are ‘green’ avatars and worship the underwater Sacred Tree.

Avatar, the first film had ended with paraplegic marine Jake Sully (Sam Worthington) deciding to remain in his Na’avi avatar and continue to live on the island. He starts a new life with his lady love Neytiri (Zoe Saldaña), the chief’s daughter. The couple is leading a good life with their four children – two sons, Neteyam (Jamie Flatters) and Lo’ak (Britain Dalton), daughter ‘Tuk’ Tuktirey (Trinity Jo-Li Bliss), and adopted daughter Kiri, who is the child of Dr Grace Augustine (Sigourney Weaver in both roles). Spider aka Miles Socorro (Jack Champion) is the kids’ teenaged ‘human’ friend, who is actually the son of Colonel Quaritch (Stephen Lang).

In Avatar 2, Quaritch and his crew’s Na’avi avatars attack the island to avenge the death of many of them in the last battle. The colonel is still chasing Jake Sully, the one he thinks betrayed him and the original mission.

“The Sullys stick together” is what Jake and Neytiri have taught their young children, even as they have trained them in physical fighting and mental strength. This is pretty much the philosophy of the film – that family is everything and we have to defend the family and stick together, no matter what.

As Quaritch gets more powerful, Jake and his family take a leap of faith and take refuge in the Metkayina sea area of the Na’vi. The story of how the Sullys win over the Sea People and their queen Ronal (Kate Winslet) and king Tonowari (Cliff Curtis) forms the beginning of the second half of the film (post-interval in India).

Also read: Navneet Kaur Thind on her character in Netflix’s CAT: “I could easily relate to Bobby Rani”

But Quaritch is still on Jake Sully’s trail and to hunt him down in his new habitat, he wreaks havoc on the island, causing damage to the people and the revered sea creatures. It is up to the Sullys now to salvage the situation, which comes with courage and sacrifice.

If you enjoyed the first outing, Avatar 2 will also make you smile and bring a tear to your eye in key moments. With a new place within the Na’vi to explore, fresh characters and subplots, not to mention the groundbreaking visual effects the second time over, Avatar: The Way of Water is a treat to watch.

After a long time, a good family film has come along in theatres, with Avatar: The Way of Water. Slightly long but beautiful nevertheless! The VFX is so good that everything seems real. (We watched it in IMAX 3D.)

The cast and crew of Avatar 2 is all set to win hearts all over with their spectacular act. The child actors of both clans are especially good.

Avatar: The Way of Water was nominated for the Golden Globe Awards 2023 for Best Motion Picture — Drama and Best Director even before its release! Such is the power or rather the confidence even the trade has in the creative genius of James Cameron and his team.

Known for creating one of the most beautiful love stories ever in sea tragedy film, the iconic Titanic (1997) that made huge stars out of Kate Winslet and Leonardo DiCaprio, in the Avatar series, too, Cameron maintains the emotional touch. More so in The Way of Water, which takes the story ahead beautifully with new characters and incidents, making way for Avatar 3, 4 and 5.

Avatar: The Way of Water will most likely break box office records and end the year on a high note – a good sign for the entertainment industry.