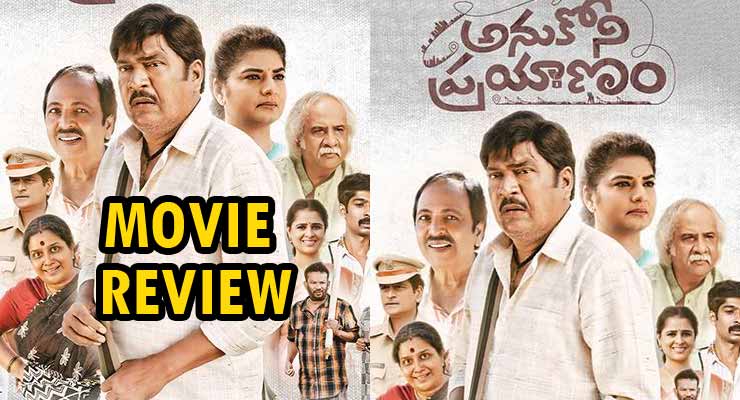 Anukoni Prayanam starring Natakireeti Dr. Rajendra Prasad in the lead role, has released today. The film co-stars veteran actor Narasimharaju in a vital role and is directed by Venkatesh Pediredla. Let us see how the movie is.

Story:
The film starts with two friends, played by Rajendra Prasad and Narasimharaju, who work as day laborers at a construction site in Bhubaneswar. Rajendra Prasad doesn’t believe in relations and is a carefree guy who minds his work. Due to COVID-19, their work gets to a standstill, so they start traveling to their natives. Narasimharaju dies on the journey, and this leaves Rajendra Prasad in shock. Rajendra Prasad decides to take his friend’s corpse to his native, and the rest of the film is about the obstacles he faces in this process and the things that make him realize the value of human relations.

Analysis:
The theme of the film is good, and it deals with human emotions. The movie stresses the importance of relations one should have in life. The story is well established in the first hour, and the emotions work well in this part. The film starts by comparing the ups and downs in human life to a snake and ladder game which sounds interesting.

Rajendra Prasad justifies his tag Natakireeti, and with Anukoni Prayanam, he once again proves that he is a gem of an actor in Telugu cinema. This is a tailor-made role for the actor, who breathes life into it. The senior actor is at his best in emotional scenes, and he deserves a special mention for picking a subject like this. After a while, he gets a role with very good scope to perform.

Narasimharaju as a companion of Rajendra Prasad, gets a good role, and he performs well too. Others like Tulasi and Ravi Babu are fine in their limited roles. The fun part at a few places in the movie is decent and showcased in a light-hearted manner. A few dialogues penned by Paruchuri Brothers have an inner depth.

Two songs by Siva Dinavahi are meaningful and add to the film’s theme. The cinematography by Mallikarjun Naragani is good, and he captured the locations in a pleasant manner. The production values are fine, and the makers spent what was required for this film.

The editing is sweet and short. Coming to the director Venkatesh Pediredla, he managed to do an great job with his narration. The basic plot point written by producer Jagan Mohan is interesting, the director succeed wholly in making the film overwhelming. He was successful in extracting the best out of Rajendra Prasad, though.

On the whole, Anukoni Prayanam has a good concept, a solid performance by Rajendra Prasad, and some good moments.