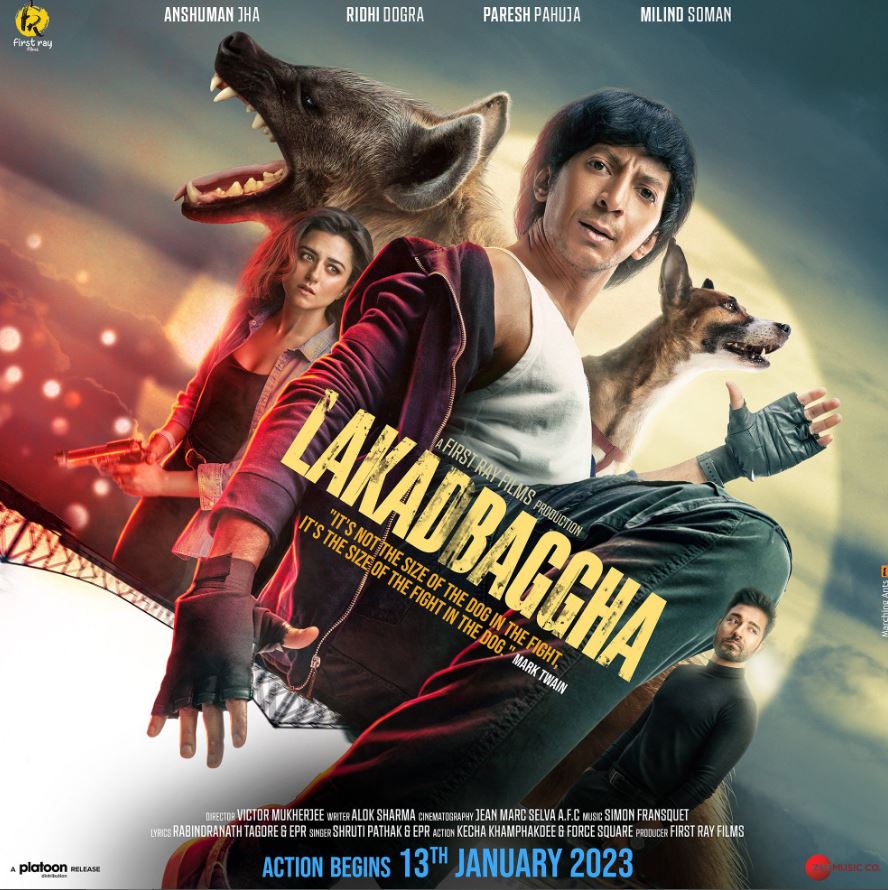 Though sluggish at times, but director Victor Mukherjee’s film rams home its message of compassion for all living beings.

Though billed as a vigilante film, the most pivotal scene in Lakadbaggha [2023] is one where the woman takes her crush to meet her big brother, and only close family member. There is a ‘meet-the-parents’ vibe about this dinner get together in Kolkata. Aryan [Paresh Pahuja] is testing Arjun Bakshi [Anshuman Jha] with his cold views, whilst the latter is throwing quotes, and philosophy to counter the big brother.

Unfortunately, Arjun and Akshara [Ridhi Dogra] haven’t expressed their feelings yet. This meet was about Arjun requesting Aryan to allow desi kuttey to compete in his dog show. Before Arjun makes his plea, Aryan laments about the animal-lover vigilante, which then leads to the latter disclosing some personal, uncomfortable truths. Aryan doesn’t know that Arjun is that vigilante. Whereas Arjun is clueless about Aryan’s real colors. He feels uncomfortable by Aryan’s lack of sensitivity towards animals. In fact, Aryan bluntly proclaims, “Animals have no souls!”.

One would think that tempers would flare, but the striking thing here is how despite their different views, the two men have few things in common. They are both sophisticated, blessed with intellect, physical strength, and headstrong. But they are also loners in their own right. Arjun doesn’t hesitate in saying that he doesn’t like talking much to people, but has more affection for animals. Just before the finale dogfight, Aryan even says, “We could have been great friends”.

One a ruthless businessman, meat lover, animal-drug smuggler, the other a vegan vigilante for furry beings. How can they be friends? Leave aside the black and grey, but it’s the brilliant mind, brawn that binds Aryan and Arjun. Ram and Ravan had the same qualities. But it was ego that consumed Lankesh.  Same goes for Aryan. Jeez, we’re so fascinated by the protagonist and the antagonist that we’re partly driven away from the core plot where the animal-lover vigilante is looking for his missing pooch rather pet friend Shonku, whilst Aryan is livid how none of his men have been able to kill the vigilante. The search hunt sees Arjun come in contact with Aryan’s rare red-stripe lakadbaggha (hyena). He hides him in a secret place, hoping to find the men who’ve perhaps held his pet friend captive.

Writer Alok Sharma and director Victor Mukherjee’s Lakadbaggha [2022] is not a first film on animal welfare. It’s fairly impressive in its unique storytelling and humble style.  We’ve seen vigilantes fight for the oppressed humans, but Mukherjee’s Arjun is a Shahenshah for dogs. Akshara admirably calls him as the Wikipedia of dogs. Lakadbaggha subtly draws one’s attention to the familiar exploitation by mankind in a populous, hungry world.  Some scenes might leave you sick in the gut, compel you to quit meat, non-vegetarian food. No preachy, yet Lakadbaggha indirectly encourages healthy and meat-free food. It also exposes the psyche of pet owners who prefer western breed, while leaving the desi  kuttey to the streets. The British may have gone, but dogs, in particularly desi pooches, continue to face discrimination.

Lakadbaggha is our introduction to the talent of Anshuman Jha. A vegetarian himself, the actor-producer had opened up about his love for animals at the trailer launch.  We could sense that speck of honesty, humanity then. Jha brings the same qualities here.  We also sensed a certain Rohit Mehra-like [Hrithik Roshan’s character in Koi Mil Gaya (2003)] tone in Arjun’s moments of deep concern. For a guy so gifted, learned, it’s a little unimaginable for Arjun to be content at being a courier. Ah, vigilantes have to keep a keep low profile. Jha is even humble in his action. “I don’t want to fight you”, he gently warns the bad guys before bringing them down mostly through Krav Maga [Israeli martial art]. He shows his mettle both as a fighter and actor. The actor-producer roped in Ong Bak 2 [2008] action choreographer Kecha Khamphakdee. We’re no expert on martial arts, but the quality of the action is intense, totally devoid of any over-the-top drama. Nor does Jha sport any 50-inch chest, or bulging biceps.  His layman personality makes him relatable and likable. You do question whether just one feeding act is enough to tame the wild dog. Besides, do vegan animal lovers not hesitate in serving meat to carnivore pets?

Pahuja was a nervous wreck at the trailer launch. But he reserved his best for the reel.  Aryan is cocky, intelligent, sophisticated. Sentiments have no value for him. More than money, it’s commitment to his clients that drives him. Being a lepidopterist only shows his insensitivity. You don’t produce such creatures onscreen regularly. Not quite a bludgeoning monster, but Aryan draws some parallel with Marton Csokas’ cold mercenary Nicolai Itchenko from The Equalizer [2014].

Ridhi Dogra has been around for over a decade, but is a late entrant to Bollywood. Her fine screen presence is backed by her captivating tone and the right intensity. She has a magnetic personality. The Akshara-Arjun friendship grows organically. Their first dinner outing is classified as a date during the conversation. “Have you been on a date before?” Akshara quietly asks Arjuna. The latter humbly replies, “Honestly, no. I’m telling the truth”

The Akshara, Arjun and Aryan get together has its moment of tension. It’s followed by the lady tagging Arjun along for a workout session. Mukherjee gets Dogra to fulfill her Krav Maga dream. She leaves Arjun with a bloody nose. The adrenaline rush is followed by passionate intimacy.  Jha roped in Game of Thrones expert to film the intimate scenes. Phew, the aesthetically shot passionate scene hits your senses.

Dogra has experienced a divorce in personal capacity. That made her a natural choice to play Akshara D’Souza. One doesn’t want to know about the real, but in the reel, Akshara is not sulking over it. After all, it is better to end a bad marriage, than endure the pain of it for life.

Akshara’s informal clothing is fine, but the Crime Branch officer could have donned the uniform in the odd scene.  If no incompetence, you do question as to how the reputed cop never sniffed trouble in her family, or be suspicious about Arjun.

Sikkim-find Eksha Kerung is not burdened with Hindi words. She simply shows her combat skills.  The first action scene with Jha is fairly intense, but something looked amiss in the dying seconds of the fight. Is it the editor’s handiwork?

A fine plot, capable cast, but Lakadbaggha fails to build consistent engagement. One respects Victor Mukherjee’s flair for realism, but the film could have done with adequate drama.  It has its sluggish moments. Mukherjee sticks to his roots, the Bengal setting. However, with no sub-titles, dedicated Hindi audiences might be struggle to latch onto to the few Bengali and English dialogues.

Meanwhile, the gripping background score is limited to few action scenes leaving us with long periods of natural sounds, if any. Belgian composer Simon Fransquet, however, makes an impression on the desis. Fransquet and vocalist Shuchi Pathak add their flavour to Rabindranath Tagore’s Purano Shei Diner Katha classic, that plays out in the opening credits. As for cinematography, Jean Marc Selva seamlessly captures the long scenes.

For a vigilante film, it’s paramount that the hero remains masked throughout the combat scenes. It is here that the director partly exposes his hero. Since Arjun doesn’t kill anyone, surely the many injured, some of whom saw his face clearly, could have given a reasonable description of their assaulter to the sketch artist.  It’s a tad frustrating that a promising plot is partly dragged down by the inconsistent screenplay.  Nevertheless, Lakadbaggha fairly succeeds in its message of having compassion for all living begins.