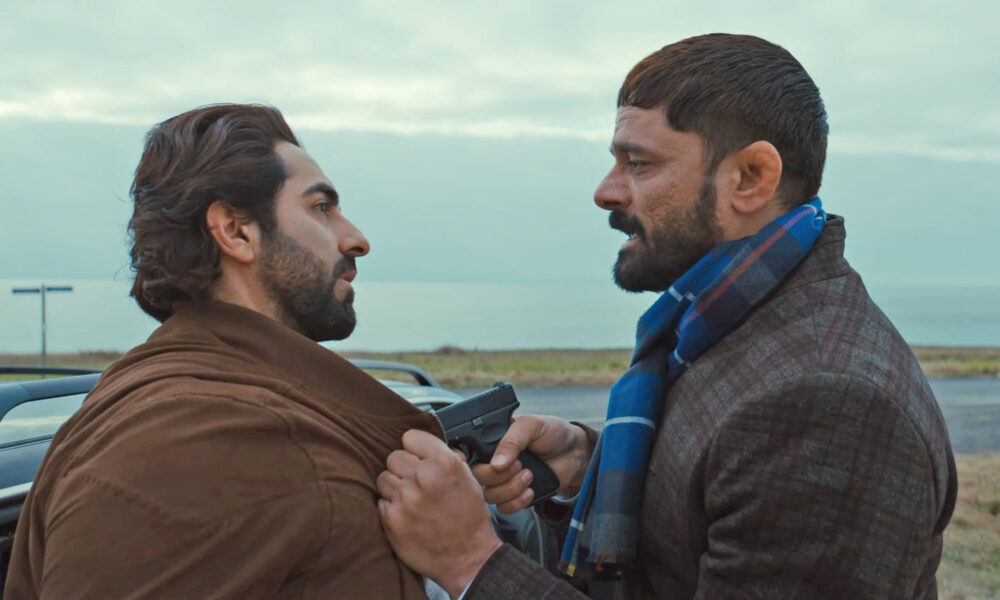 Movies about movies are my favorites. After watching the film I wondered whether its trailer was misleading or smartly kept the film’s best subplot a secret. In the first half, the film keeps you guessing whether it might be heading. No time is wasted in setting up the world or character as it should be done in a thriller. You get to know the characters as the film progresses. So, Maanav (Ayushmann Khurrana) is a superstar of Hindi cinema who accidentally pushes a politician brat who falls on a rock and gets hit on the head, and dies on the spot.

Maanav is aware that the situation will go out of control. So, instead of coming back to Mumbai from Haryana where he was shooting, he flies to London to escape. But the dead man’s brother Bhoora (Jaideep Ahlawat) decides to avenge his brother’s death by killing Maanav. Bhoora flies to London even before his brother is cremated. Thus, begins a cat-and-mouse chase between Maanav and Bhoora. Third parties get involved too. Maanav’s manager Roshan (Harsh Chhaya) tries to help Maanav from India – by arranging flights, a lawyer, etc. A supposed helper (Neeraj Madhav) turns out to be a dealer who wants to sell Maanav to someone else.

There are many meta references to heroes and movies in this stylish flick. Akshay Kumar makes a surprising and hilarious cameo. For an action film, the action here looks realistic. The men here don’t look like they’re performing stunts, but actually fighting. The fight is not just for the sake of it. There are also ideologies clashing between Maanav and Bhoora. Ayushmann is uber-cool as the superstar, breaking away from his small-town softie roles. He succeeds in making this transition smooth.

Jaideep Ahlawat is effortless as the wrestler-turned-politician from Haryana. Ahlawat carries immense vulnerability on his face that helps him humanize all the tough/bad guys he has played. In An Action Hero, you can notice the fractured masculinity of Bhoora through Ahlawat’s mannerisms.

The action surprisingly moves to the den of a dread Don. The Don tells Maanav how Hindi cinema hasn’t changed his image on the screen. They have stuck to his image of the 90s – aviator glasses, cigarettes, and a mustache. He doesn’t even live in Karachi anymore. This whole elaborated sequence is the most delightful part of An Action Hero. There’s wit, humor, action, and philosophy, if you may. This sequence reminded me of Quentin Tarantino’s Inglourious Basterds where Tarantino took the liberty to change an event in history for his own delight. No complaints here in An Action Hero. I thoroughly enjoyed every bit of this sequence. After all, after God, only a writer/filmmaker can take the liberty to dictate how a story should pan out.

The story by the director Anirudh Iyer is innovative. No doubt, it’s his love letter to the movies. The screenplay and dialogue by Neeraj Yadav are top-class. The locations in London and Portsmouth provide fresh visuals. The action is ably supported by an electrifying background score. The Malaika Arora item number has moments that will leave you in splits. Must give credit to Aanand L Rai for backing a film like this. He is picking better projects to produce than he is picking for directing himself. To sum up, An Action Hero is innovative, fresh, and super fun.